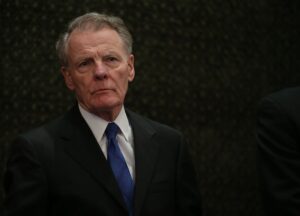 Illinois has big problems. It has a Mike Madigan problem. It has a tax problem.

Sure the ComEd admission this summer was jarring, but we sit on the brink of yet another tax hike. The theory that the House Speaker made people “pay to play” isn’t a new one. But now we’re seeing it in plain English on written 30-plus pages of federal court documents and it proves these aren’t the little whispers going around Springfield or the southwest side of Chicago anymore.

This storyline is especially important at a moment where the mess of taxing and spending is at a crossroads in Illinois. With the Progressive Tax Initiative waiting on the November ballot, Madigan has to convince 3,000,000 people to be on his side, not just a few state representatives. In 2017, it was a different story. Let’s flashback, shall we?

A world where John Fox was still coaching the Bears (Okay, you don’t have to remember that if you don’t want to.) A world in which a tax hike was supposed to save Illinois.

“I do not want to raise taxes, but I was hired by you to govern.”

Meet Steve Andersson. He sponsored 52 bills in the House. Seven of them were “atta boy’s” to various teams and schools around Geneva. We all like a shout out on the House floor, and this barn-barner of a finish to win the Class 4A Girls Basketball State Title certainly deserves it! However, if 14 percent of your legislation in four years in Springfield are only “congratulations,” I wouldn’t call that progress.

If you recall, the 2017 budget stalemate dragged on for so long that Madigan needed GOP help to ram the 2017 income tax through. There weren’t enough Democrats in power to push past a Governor Rauner veto. Andersson was one of the few that could make it work.

Andersson pushed the vote through, lost his Floor Leader post just four days later  and a month after that, he announced he wouldn’t run in 2018. In his wake, the state’s income tax rate increased by 32 percent on individual filers and 33 percent on corporate filers. It permanently increased the tax rate from 3.75 percent to 4.95 percent on personal income.

But why in the world would someone risk all that on a tax hike? I invite you to look at the front page of the Chicago Tribune the day after the vote happened and I ask you a very important question?

What do you think is being discussed while these two shake hands on the House Floor?

Maybe now we have the answer. The man who helped orchestrate the passage of the biggest income tax hike in Illinois history ended up with a rather convenient back up plan. Andersson was on the list of 35 people that Madigan sent to Govenor-Elect J.B. Pritzker to hire. This was the latest corruption / clout story that happened a month before the ComEd news broke.

Andersson landed a cozy part-time gig on the state’s human rights commission for $122,000 taxpayer-dollars a year. As a licensed attorney for nearly 30 years, it’s not that he needs the money, but he clearly needed the favor. He needed to know that if he was going to be sacrificing his career to help greedy lawmakers who can’t cut spending, then there better be a reward on the back end.

When you do a deal with Madigan, there always will be.

David Harris knows this. Having served alongside Madigan for 18 years, the long time Republican knew in 2017 that if he voted for the largest tax hike the state has ever seen, he better have a good plan in mind. So three months after the vote, he called it a day saying he wouldn’t run for another term in 2018.

But as we were reminded this week, his departure from the Illinois General Assembly happened after he floated a retirement tax. The kind of retirement tax that State Treasurer Michael Frerichs so desperately wants if the amendment passes in November.

“I want to be effective and I’m not sure I can be that now.”

Don’t worry. Get on the list! Harris did so, his name is right there on the same list of 35 people that Madigan sent to Pritzker! (‘sent resume’)

So after voting to raise your taxes, and a proposal to create a retirement tax before bidding the House Floor farewell, Harris ended up as the director of the Department of Revenue. It’s a $168,000 a year job paid for by taxpayers. He’s in charge of 1,500 people with a $55 million budget. He works alongside Treasurer Frerichs, likely among those telling him to ‘zip it’ to the media these days. What’s amazing is that there is nothing on Harris’s resume that shows that he’s even close to qualified for the position.

Madigan doesn’t worry about that when it comes to Republicans.

“They’re on the sidelines. “They don’t want to get on the field of play.”

When you reflect on the 2017 tax experience, you have to keep in focus the Madigan problem, the tax problem and the trust problem all rolled into one. While the rest of Illinois focuses on the ComEd situation, the latest AT&T subpoena, and the oodles of Madigan cash flowing into campaigns, (and still coming into his!) don’t forget about the little things.

Two key lawmakers boomeranged their political careers around your tax dollars and ended up with jobs that combine to pull in about $300,000 of your money a year. That doesn’t happen by accident.

Oh, and Madigan is still in charge and more tax power is on his doorstep.

However, it should be much harder to do a deal with 3,000,000 taxpayers of Illinois. You can vote your conscience in November, instead of worrying about what Mike Madigan thinks. It’s not like he will throw money at one of your neighbors to ruin your chance to be on the PTA. Madigan won’t make sure your kid doesn’t get the big part in the play or lose a starting spot on the basketball team. He can’t do a deal with everyone.

Slam the door shut in November if you want to be sure of where Illinois stands against corruption and higher taxes, because if you open that door, the devil will walk right in.