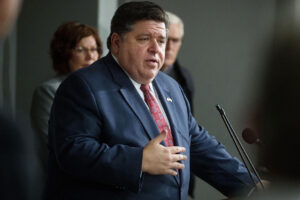 Last week’s bombshell Inspector General report about the COVID-19 outbreak at the LaSalle Veterans’ Home that led to the death of 36 veterans is still rocking the statehouse. From one party at least. House Republicans, on top of pushing for legislative hearings, want an Attorney General investigation to figure out if the fatal mismanagement involved any criminal aspects.

On the other side of the aisle, we’ve heard very little to nothing from Speaker Chris Welch and Senate President Don Harmon on the matter.

The families who lost loved ones deserve accountability. Some of them have already taken action and filed lawsuits. The Chicago Sun-Times spoke with the son of a veteran at the home who filed suit. He said:

He holds the state liable for the death of his father.

This was a major tragedy that could have been avoided. It will forever be a major stain on the Pritzker Administration.

Meanwhile, the General Assembly seems to be overreaching yet again when it comes to your child’s education. After a year of instability for most Illinois students, some were fortunate enough to have the opportunity to attend in-person learning since August in private or charter schools or their own public schools based on the decisions made by their local school boards.

Politicians want to change that. Rep. Michelle Mussman (D-Schaumburg) and Sen. Chris Belt (D-Centreville) are pushing a bill, with the support of teachers unions, to grant authority to the Illinois Department of Public Health to control ALL schools, including private institutions. If this becomes law, the state has the power to shut down your child’s school no matter the success of the health and safety protocols they have in place in case of another public health emergency.

The teachers unions don’t want to be held accountable for failing to get kids back in school sooner. They want all other schools brought down to their level, so they don’t look as bad. But, they can’t control schools in other states so families can see how Illinois is lagging other states who have reopened their economies and schools. We can’t reward the government with more power after the Pritzker Administration failed to lead on these issues.

As the end of session winds down in a couple weeks, Illinois residents remain in the dark on what the budget looks like, what potential legislative maps will look like, and what the movement will be on a series of other issues such as ethics reform or an energy bill being pushed by Pritzker’s team. That’s because the whole legislative process has been kept in the shadows as House and Senate Democrats are embracing the same lack of transparency that was a Hallmark of Mike Madigan’s reign.

The names of those in charge change, but unfortunately the results don’t.

This was brought home again this week when, embarrassingly enough, House Democrats were caught filing in and out of a backroom in the statehouse to discuss which voters they want to represent. They claim to be transparent in the map-making process while quite literally making moves behind closed doors.

This is not a bug but a feature of how business operates in Springfield. State Rep. Blaine Wilhour (R- Beecher City) says, “The level of work that has been done on serious issues up here is completely embarrassing.”

As active participants in the movement to change Illinois, we must hold these politicians accountable for their actions and educate and encourage our neighbors to do the same.