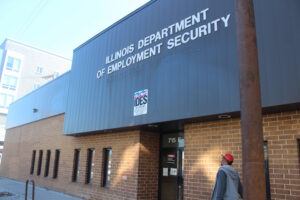 As we pass the one year mark of the COVID-19 shutdowns, Governor Pritzker’s failures at the Department of Employment Services (IDES) remain in the news.

Every week there seems to be a new story on a case of ridiculous fraud or ineptitude from the department.

This week a debit card was sent to a woman’s home who has been dead for more than five years after fraudsters managed to claim she was recently laid off.

Another woman who was a victim of an unemployment scam was sent a letter claiming her state tax refund was being withheld because she had been overpaid. Yet, she was working the entire pandemic.

As of now IDES employees will remain working at home and the department doesn’t plan on reopening offices until later this summer.

A year later, problems have not been fixed leaving thousands of Illinoisans victims of fraud, without benefits, and long waits to get in touch with an IDES employee. It has been a complete failure by the Pritzker Administration.

As the state starts reopening and businesses and families try to get back on their feet, the politicians in Springfield are pushing for yet another tax hike. House Bill 3920 would double the estate tax making it the highest in the nation.

While other neighboring states have abolished the estate tax to protect family farms, Democrat State Representative Elizabeth Hernandez is looking to burden them even more.

During the pandemic, the Illinois Farm Bureau raised $21,000 to distribute 252,000 pounds of food for those in need. This bill would punish the farmers who have generously provided for their communities during this hard time. Illinois should take the lead of those around us and abolish the estate tax altogether instead of doubling it.

This pandemic has also exposed those in charge of the public education system in Illinois. State Rep. Blain Wilhour’s bill that would put students before systems goes in front of the Education Committee Friday afternoon. Thousands of students and their families have suffered through remote learning as some school districts have yet to open for full-time in-person learning.

Rep. Wilhour’s bills would give vouchers to families whose public schools are not open for full time in-person learning. The Illinois State Board of Education filed a witness slip opposing this legislation. Further cementing their support for the adults in the system before the students.

Lastly, thank you to the National Guard for their incredible work during this pandemic. At the beginning, they were tasked with operating mass COVID testing sites and then were later forced to protect our communities during the out of control riots during the summer.

Now, state health officials credit the Guard with vaccinating more than a half million Illinoisans. Their service during this time of crisis can not be understated.

Today is the final day for bills to be read in committees. We will continue to keep you updated as they head to the Floor in the next coming weeks.

Stay tuned for opportunities to join our efforts and fight against anti-taxpayer legislation.