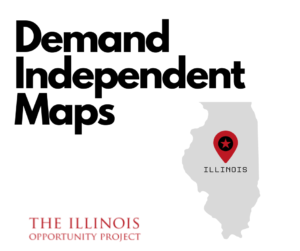 Gov. Pritzker pledged he would “veto any map that was unfair.” Now, when it’s actually time to start drawing the maps, he is backtracking. We are seeing the same corrupt process as before.

Springfield political insiders are trying to disenfranchise voters and draw maps that favor themselves above doing what’s fair. They are committed to meeting the constitutional June deadline to submit a map before they even receive the accurate census data for fear of having to work in a bipartisan manner. They are rushing because their power is at stake.

Creating an independent commission to draw the maps instead of giving the authority to partisan politicians would give Illinoisans true representation and power to participate in competitive races.

In 2020, there was a bipartisan movement for a Fair Maps Amendment which would do just that. Some said it was a publicity ploy not intended to go anywhere. And it didn’t: the Amendment died in committee. With the positive headlines secured, The General Assembly didn’t gather for months missing the deadline to get it on the ballot for voters to decide in the 2020 Election.

He is already in political trouble with his approval ratings plummeting and his handpicked candidate to succeed Mike Madigan and become the new Democrat State Party Chair failed to garner the votes. He’s not going to rock the boat with the political insiders he seeks to please in Springfield.

For too long, politicians have had the power to choose who they represent rather than the other way around.

Sign here to demand an independent and transparent map-making process that puts the voters before the politicians.