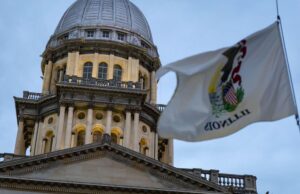 It has been a blockbuster year for corruption, crime, and soaring costs of everyday goods. But in Springfield, Gov. Pritzker and the Democrat majority sat on their hands and decided to do nothing to address any of the issues on top of mind for struggling Illinois families.

One of the most significant and consequential events in Illinois political history happened during this session: The indictment of former Speaker of the House, Mike Madigan. So is it too much to ask for even a hearing on ethics reform? Apparently.

After decades of speculation and investigations, Mike Madigan was indicted for racketeering, extortion, and other charges brought by federal investigators. Legislators who had previously supported Madigan as Speaker and accepted millions of dollars in campaign donations either remained silent or released toothless statements condemning the alleged illegal behavior.

To make matters worse, former Chicago Alderman and close Madigan ally, Danny Solis was indicted on Friday as well as the revelation that State Rep. Thaddeus Jones, who also serves as Mayor of Calumet City, is under federal investigation for tax issues involving his campaign funds.

This should have been a major wake-up call to root out corruption and finally start serving the people of Illinois fairly and honestly, but complicit Democrats continued snoozing anyway.

There was no movement on needed ethical reforms to move the state forward and away from these multiple scandals.

Perhaps Democrats hope these scandals will be behind them by the November election. But a recent poll done in Chicago shows that voters still have a strong distaste for Madigan and his corrupt tactics. The poll found more than 80% of Chicago voters have an unfavorable rating of Madigan. Those numbers don’t bode well for incumbent Democrats.

In addition to Madigan’s alleged criminal behavior, families are increasingly worried about public safety. After the passage of last year’s anti-law enforcement bill (HB3653), police departments have reported a plummet in morale and their ability to retain and recruit officers.

The same year the law was signed by Gov. Pritzker and blessed by notorious Cook County State’s Attorney Kim Foxx, Chicago had over 800 homicides, and according to the Chicago Police Department’s latest internal crime performance report, overall crime is up 36%.

And it only gets worse. Gov. Pritzker and the General Assembly also passed a law allowing State’s Attorneys to present cases to reduce sentences of convicted criminals. At a time when crime is up, and prosecutors should be focusing on putting bad guys behind bars, Gov. Pritzker gave far-left prosecutors like Kim Foxx another avenue to put families at risk.

Legislators also refused to repeal the no cash bail provision that begins next year, among many other items that have left law enforcement demoralized and families anxious and unsure of the safety in their communities.

Lastly, Gov. Pritzker is trying to boast about saving taxpayers’ money at the gas pump. But, in reality, he is simply freezing the second-highest gas taxes in the nation, behind only California. Pritzker hopes flashy headlines will save face, but taxpayers will feel little to no relief as they pay record-breaking gas prices.

Between high gas prices and increasing property taxes, voters won’t be able to be convinced by campaign commercials claiming the state is heading down a more fiscally responsible path.

Gov. Pritzker and the Democrat majority hope a do-nothing session during an election year is their best bet for success in November. But, with the historic crises facing Illinois families, their gamble might be heading for a bust.