Illinois’ political class is notorious for its manipulation of the election process. This notoriety has been discussed at length on cable news and glamorized in popular culture.  It’s “The Chicago Way.”  The whole façade loses its luster, however, when one considers the results of this corruption: we are the worst run state in the nation; we have the worst credit rating in the nation; and our unemployment rate is sky-high. Political leaders remain seemingly unmoved. This weekend, Gov. Pat Quinn made the last bill he would sign into law SB 172, an egregious elections bill that comes very close to codifying Chicago’s “Early and Often” tradition of election fraud.

In June, I wrote about a similar bill, HB 105, which set up same day voter registration and eliminated the requirement to present identification prior to voting. The law was written to apply to the November 2014 election cycle only. This was a clear attempt to protect incumbents. The law targeted voters who had not indicated any intention to vote prior to election-day. These voters are very likely to base candidate selection on name-recognition. Additionally, the Illinois Democrat political operation is a well-oiled and unscrupulous machine – especially on election-day. HB 105 made it very easy for Democrat poll-watchers in key districts to turnout additional votes as needed.

The ruling class, especially Speaker Michael Madigan’s House Democrats, reaped the benefit of their bill (in combination with their gerrymandered election maps). In November, due in no small measure to HB 105, Madigan’s Democrats barely clung to 5 contested House seats by a combined 4,579 votes out of 148,261 votes cast; and only held on to their super-majority by 122 votes.  Despite the manipulation, a Republican, pro-business governor—Bruce Rauner—was elected. The people of Illinois spoke clearly. They demanded a more balanced government. 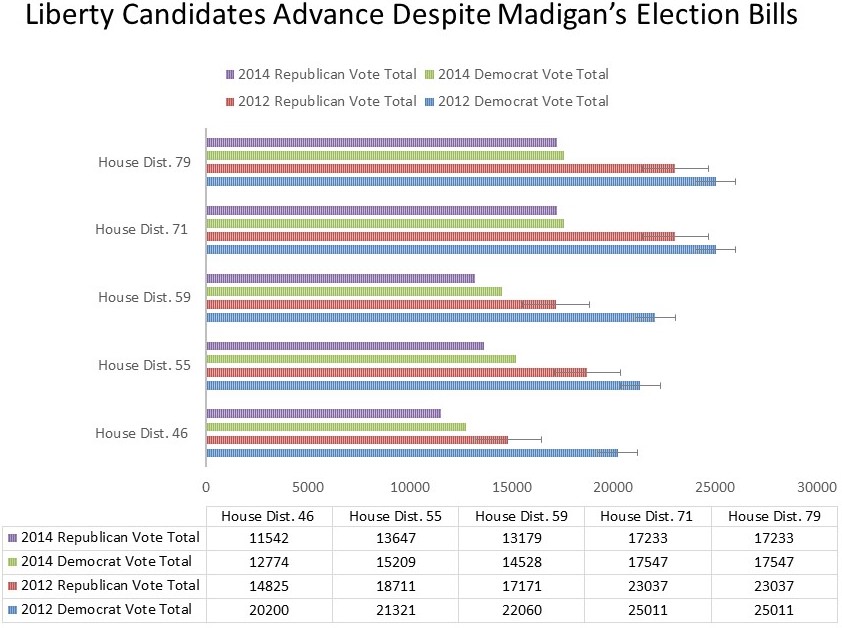 Speaker Madigan and those he placed in House leadership positions saw the writing on the wall.  Their vicelike grip on the General Assembly was in jeopardy. So they passed SB 172 on a straight party vote during Veto Session in early December.

In addition to making the Democrats’ same-day voter registration advantage permanent and mandating same-day registration in every precinct, the legislation:

State legislators who voted for this bill took a misguided experiment and turned it into bad state policy.  In one fell swoop they rejected not only your desire for a balanced government as expressed through Rauner’s election, but also your capacity for self-government by protecting and enhancing their ability to manipulate elections.

At Illinois Opportunity Project, we think you deserve a government that believes in and answers to you. Today, we inaugurate a liberty principled governor into a system that is weighted against him. Now more than ever, the taxpayers of Illinois must realize that their civic duties extend beyond the voting booth.

Under Illinois Democrats, the state’s fiscal security, free-market productivity, and our ability to provide necessary services are in a freefall. Republicans who have the political courage to place Illinois back on a sustainable path currently control neither the House nor the Senate. We have just won the Governor’s Office, but unless the people of Illinois find the will to push back against the remaining political establishment, it will be difficult to end Illinois’ tradition of corruption or to halt our march into insolvency.

Join our Policy Revolution. Advocate “Early and Often” for free market reforms and structural changes.  Together, we can build a state rooted in liberty and flush with opportunity.