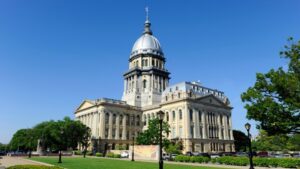 November 3: The Moment for Illinois is Here

Famous Fake Weatherman Brick Tamland has a brilliant line in the movie ‘Anchorman’ that sums up the 2020 walkup to the Tax Hike Amendment:

Sometimes, I don’t know what we’re yelling about either. On one hand, the people who are pitching this Tax Hike Amendment say that it will fix all our problems. We’ve heard that before. 2011’s version was supposed to be temporary. It wasn’t. 2017’s was supposed to pay down pensions. It didn’t.

Yet, on the other hand, I hear Pritzker’s spokesman Quentin Fulks say, “The notion that this won’t help because it doesn’t solve everything at once just doesn’t make sense.”

Huh? So it won’t help us entirely, but it opens the door for more tax power, and you’re doing that with the most corrupt legislative body this side of the Atlantic?

How does that convince me that this is a good idea for Illinois?

If my 5-year-old takes a permanent marker and uses it on a nice kitchen table because she doesn’t have any paper to color with, I should vote for that plan? Maybe I ought to go get some coloring books. See, I’m a fan of finding better ideas.

The problem with the people who support this idea is that they have no idea how to actually address the real problems of Illinois. The commercials are fancy, but the people starring in them are millionaires themselves. The numbers sell you up the river, mostly because you won’t see a tax break. Plus that’s not what you’re voting on, but I digress.

When five lawmakers who voted to put it on the ballot are all staring at jail time, shouldn’t that give you pause? How about a senator who evaded his own taxes telling you to support this tax? How about a Governor who ripped out toilets to avoid paying more in taxes himself? Doesn’t that make you think?

Plus, State Treasurer Michael Frerichs did himself quite the favor back in the summertime by saying that a retirement tax is a good idea. He knows it’s something that will happen because state lawmakers can’t help themselves.

“It’s a lie. The Fair Tax has nothing to do with taxing retirement income,” Fulks said.

No, you’re lying Mr. Fulks and you’re good at it too.

In fact, he has been lying to you for the last year plus now. The Tax Hike Amendment has EVERYTHING to do with taxing retirement income. You know why? Because after doubling the gas tax, streaming tax talk, plastic bag tax, increased parking garage tax, higher fees for vehicle registration, the process of elimination makes everything very simple.

They’re running out of ways to tax you.

Illinois is one of five states in the union that doesn’t tax retirement. Every state that has a progressive tax system also taxes retirement. Do you think that we’ll be the only state that doesn’t tax retirement just because “they promised?” Do you think they’ll just leave that revenue stream alone even though Illinois needs $10 billion plus to fix this year’s FY21 budget or $160 billion in pension liabilities?

Imagine Fulks or Pritzker or even Madigan saying in the most-Blagojevich like way: “I’ve got this thing, and it’s (bleeping) golden.”

That’s what the retirement tax is. It’s not the front door. It’s the side door, to get in the garage, to get in your house. It’s the key to the castle. You still can get in both ways. One is just a little more ambiguous.

There are plenty of other tidbits to knock down. No, it won’t be just the rich paying for it. They’ll leave or just change their address. They’ll take jobs, property tax dollars, and community engagement with them. For those of you saying ‘Don’t let the door hit you on your way out,’ imagine that franchise owner of Wendy’s in Decatur who says “I’m out.” 30 minimum wage workers are out of a job. That wealthy landlord of yours that is always helpful? Yup, your rent is about to go up. Cause equal effect and no, I’m not rich.

No, your taxes won’t stay the same or go down. They’ll go up. They went up five times in Connecticut in the last 25 years, the last state to do this. They lost $10 billion in revenue and it cost them 360,000 jobs. Oh and their property taxes have shot up 35% since 1996.

No, Mike Madigan isn’t going anywhere, and you’re about to hand a blank check to a man under federal investigation because of an alleged bribery case.

No, you shouldn’t raise taxes in a recession. I didn’t say it, Barack Obama did. You know, J.B.’s wealthy friend from the Southside. It’s basic economic sense, and more than 110,000 businesses in Illinois are hanging by a thread in the midst of a COVID-19 uptick with the hope they don’t have to close their doors.

As we watch those restaurant owners say ‘I’m damned if I do, damned if I don’t’ when it comes to the latest mitigations and forced closures, we just might be getting the sense that Illinois taxpayers have finally had enough. They’re tired of being told what’s in their best interest. They’re tired of what’s coming out of Springfield. To thousands of business owners, this is their moment. To millions of voters on November 3, that is your moment.

We started this closing argument with a movie quote, we’ll end it with a variation of one. When it comes to fun cinematic moments, political nerds like myself perk up about the scene in “The American President,” where President Andrew Shepherd surprises a filled Press Room after weeks of hearing nasty rhetoric from his opponent on the campaign trail. With the months of false advertising, false hope, and fear mongering, it’s time to put to bed the real reason why this Tax Hike Amendment isn’t going to be rammed through next week.

I’ve been operating under the assumption that the reason the Tax Hike Amendment supporters devote so much time and energy to shouting at the rain was that they simply didn’t get it.

Well, I was wrong.