Opportunity does not simply exist. It must be forged – inch by inch and day by day. By advancing a policy agenda rooted in economic liberty. By taking risks and making sacrifices. By working harder and longer than those who benefit by embracing our decline. A task this large and this critical to our future requires leadership – everywhere.

Since 2011, The Illinois Opportunity Project has been identifying, training and recruiting leaders – policy makers and advocates alike – who are committed to forging that opportunity to improve the quality of life for everyone in Illinois.

The leaders we have developed range from executives and small business owners to military veterans and home schoolers. Each is dedicated to advancing policy in Illinois rooted in the liberty that produces opportunity. Whether we are identifying talent in target House and Senate districts; engaging hard-to-reach communities; or building the infrastructure and messaging networks necessary to target center and center-left voters; we are working with these leaders to improve the quality of life for Illinoisans by enacting good policy. This effort begins at the local level – on city councils, in village halls and on school boards. 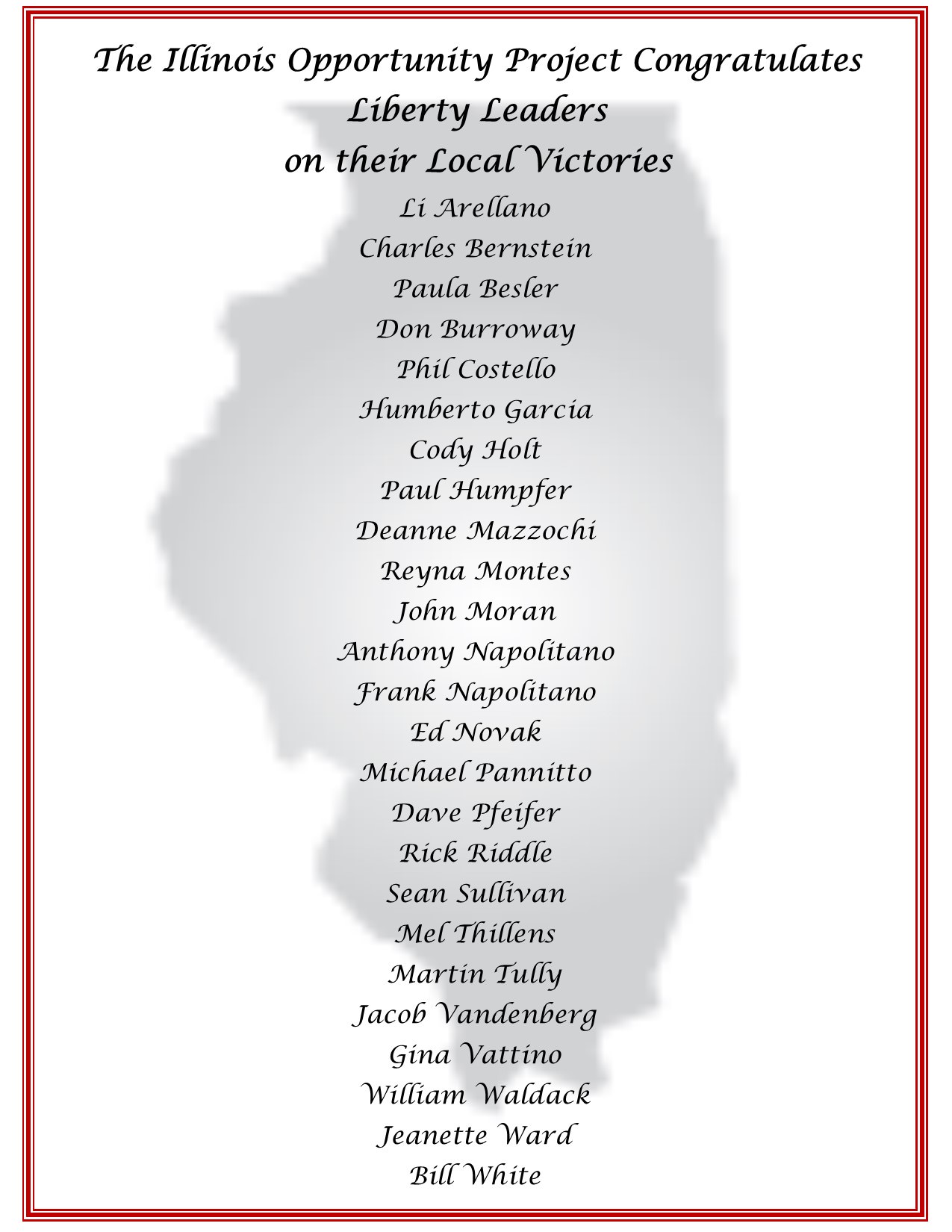 On April 7th, elections for local government officials were held across the state. Our leaders did not disappoint.

Li Arellano of Dixon, Illinois is a textbook example of how investing in talented people pays off. As many know, in 2012, the families and businesses of Dixon were rocked by a financial scandal that drew national attention. Longtime comptroller, Rita Crundwell, was led from City Hall in handcuffs for looting a staggering $54 million from the city’s coffers over the course of two decades. Ready for a fresh start, the people of Dixon elected a new mayor to lead the city’s civic reformation: Li Arellano, an Army Sergeant and owner of three local small businesses.

When we met Li in 2011, we saw his potential. We could see that, given the opportunity, he had all the right ingredients to play an important role in Illinois’ Policy Revolution. We continued to work with him as he became a leading activist in his community: we included him in our policy advocacy training, partnered with him to host a tele-town hall advocating for transparency and financial safeguards, and supported him in his successful effort to defeat a sales tax increase. Arellano will play a significant role in Dixon’s fresh start when he is sworn in as Mayor next month.

Li is just one example of the leaders we are partnering with and developing in local governments.

In Chicago, we supported Anthony Napolitano. Napolitano, who ran in the 41st Ward, won his campaign against the Chicago Democrat machine and their Alderman, Mary O’Conner. In this election, we replaced an ally of Mayor Emanuel (O’Connor voted with Mayor Emanuel 98% of the time and received nearly $50,000 in support from Rahm’s Super PAC), with a principled, independent-minded advocate for the free-market agenda.

In Downers Grove, we provided material support to Mayor Martin Tully in his re-election bid and to a slate of three principled trustees. The three trustees we supported defeated two longtime incumbents and promise to be vocal leaders for liberty principles. In Downers Grove and throughout DuPage County, we continue to recruit, develop and support leaders to reengage and to develop these traditionally free-market oriented strongholds and to ensure there is local leadership and support for liberty-based policies.

In Illinois’ second largest school district – Unit School District 46 – the three independent reformers we supported were elected despite facing strong opposition from the local establishment and public sector unions. The campaign message focused on delivering quality education while being respectful and responsive to taxpayers. This enabled our candidates to win over persuadable voters. Ultimately, they won the left leaning district, which covers parts of Elgin and Carol Stream.

These victories have established that our approach of developing and investing in talented leaders and understanding local, community, and even neighborhood dynamics, will persuade independents and soft Democrats that liberty-based policies are the best way to provide opportunity to all Illinoisans. We have already begun utilizing the momentum from these victories to recruit candidates, build a deep bench and advocate on good policy in order to ultimately implement the reform agenda across Illinois.

Become a partner in our Policy Revolution by donating $25, $50, or $100 today. Together, we can empower local leaders and state legislators to implement liberty focused policy solutions that will improve the lives of every Illinoisan.