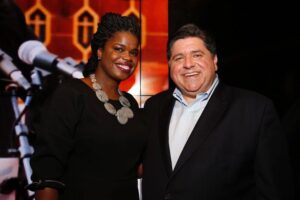 “Kim Foxx inspires me everyday through the work she does to protect Cook County- We need to keep unwavering, reformative leadership like hers in office.” That was high praise from then-candidate Pritzker in support of Cook County State’s Attorney Kim Foxx in 2018.

“We don’t know where to go. It’s not seeming like the justice system is working for us. And that’s disheartening, it’s just angering,” grandmother of six-year-old Serenity Braughton who was shot and killed in Chicago and whose murderer faced no charges.

“It doesn’t make sense. It was murder. It wasn’t self-defense. My son never swung. He never had a chance to fight,” father of Elgin teen who was stabbed to death and whose murder faces no murder charges.

In Chicago’s Austin neighborhood just last week there was a shooting characterized as a “Wild West Shootout” leaving one dead and two hurt. No charges were filed.

In the city of Chicago to date, there have been 45 people accused of killing, trying to kill, or shooting someone this year while awaiting trial for a felony.

According to CWB, Chicago has also seen a 38% rise in carjackings.

Now let’s go back to Gov. Pritzker’s high praise of Kim Foxx. Do you think the families who are grieving the deaths of their loved ones, victims of a carjacking, and the rest of the county are appreciative of the work Foxx is doing “to protect Cook County?”

Do you feel protected?

It would be easy to blame all Chicago and Cook County’s high crime problems on Kim Foxx. Mayor Lightfoot is certainly trying to. But Foxx wouldn’t be in the position she is without the support of Gov. Pritzker and the rest of the support from the Democratic majority in Illinois.

That includes politicians like Sen. Sara Feignholtz who represents the Northside of Chicago. She tweeted the other day, “Something has got to change @KimFoxx. Our city is a war zone.” Yet, Sen. Feignholtz voted for the criminal justice reform bill that severely undercuts law enforcement and eliminates cash bail.

Democrats Rep. Anna Moeller and Sen. Christine Castro, who represent Elgin where the father of the murdered teen cries out for justice, also voted for the same so-called criminal justice reform bill.

It’s a collective effort. And it’s only going to get worse if there’s no change in leadership. Leaders who do what’s right and not what’s trending on Twitter. Leaders who stand up for their constituents and not kowtow to the politics of the day. Because for every Kim Foxx, there’s a group of Illinois politicians looking to uphold her status quo.

Democrats may not want to make crime their top issue heading into 2022, but it’s top of mind for most families in Chicago and beyond.