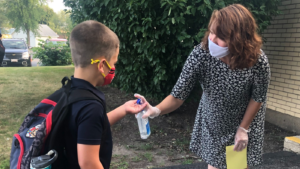 It’s a bit ironic that at the beginning of National School Choice Week, the Chicago Teachers’ Union is threatening a strike and voted not to report to their classrooms in preparation for the return of K-8 students on February 1.

The Liberty Justice Center believes the strike is illegal, but it doesn’t take away from the fact that the union continues to stand up for the adults in the system and not the children they are supposed to serve.

Chicago Public School students are approaching the one year mark without any in classroom instruction. Throughout the negotiations and bickering between politicians and union bosses, parents and their children have been left out of the conversation.

Arguing that the classroom conditions are unsafe, CTU believes the earliest schools should be open is when teachers can be vaccinated, which could take weeks or months more while students are suffering now.

Parents deserve more options for their child’s education and that’s why school choice policies such as Illinois’ tax credit scholarship program, the Invest in Kids Act, are so critical in times like this.

For example, the archdiocese of Chicago’s Catholic schools have been successfully and safely reopened for in-person learning since August 2020. More parents should have the opportunity to send their children to schools of their choice regardless of their income or zip code.

On the other hand, some parents like Nancy Curran aren’t quite ready to send their children back into the classroom. Still, she has been disappointed to see the low expectations set for her son with disabilities while observing his virtual learning.

Even Mayor Lori Lightfoot recognizes the issue stating, “Here’s what I’m hearing from residents all around the city and from parents in particular: If we don’t have stability in the public school system, why should we stay in Chicago?” For reasons like this and more, Chicago Public Schools reported that their enrollment plummeted by 15,000 students.

One thing this tragic pandemic has done has been exposing the education system that puts institutions above students.

Despite bipartisan growth in support for giving parents a choice in their children’s education, there’s still one group and one politician in power that cannot get behind the movement. The government education unions and Governor Pritzker.

Gov. Pritzker has repeatedly called to end the Invest in Kids Act with the Illinois Education Association’s support.

In the lame-duck session, an education reform bill pushed by African American legislators initially sought to expand the Invest in Kids Act. Still, after lobbying from the teachers’ unions, it was taken out and passed without it.

The Invest in Kids Act was passed in 2017 and has empowered thousands of parents across Illinois to choose where their child can receive the best educational opportunity.

Anthony Holter, president of Empower Illinois, the state’s largest scholarship-granting organization, said they “issued 5,500 scholarships (last year) and with every one issued, there were six more kids in line for one.”

Parents are desperate for better educational opportunities for their children. The General Assembly must act to make the Invest in Kids Scholarship Program permanent so that all children, no matter their disability, family’s income, or zip code, receive the best education possible.