Heading into the 2016 Budget Address, no one expected that Governor Rauner’s plan to scale-back Illinois’ oversized, outdated, underperforming state government would receive a warm welcome from Democrat Party leaders.  However, as there is a certain amount of pomp and circumstance surrounding the address, we might have expected some decorum from those on whom the cameras were fixed.

As the pro-business governor described the severity of our state’s fiscal crisis, Senate President John Cullerton could barely contain his condescension – laughing mockingly while the Governor outlined cuts to state programs. These cuts have become necessary after over 12 years of reckless spending under the leadership of one party.

The state’s fiscal circumstances, for example, put low-income families at risk of being denied the day-care program they had come to count on.  The very same liberal politicians who claim to lookout for the little guy failed to considered the sustainability of the program; and failed to take responsible measures to fund the program.

Worse still, is that these very same politicians are comfortable sending the children of these low-income families into a school system that will fail to bring 60% of them to grade level achievement by June; a school system in which two-thirds of fourth graders do not perform at grade level in reading or math; a school system that they refuse to lift a finger to reform, lest they risk the generous campaign funding doled out by teachers unions. It is their choice to put bureaucrats ahead of children and families that keeps children trapped in failing schools, and relegates them to second class citizenship. 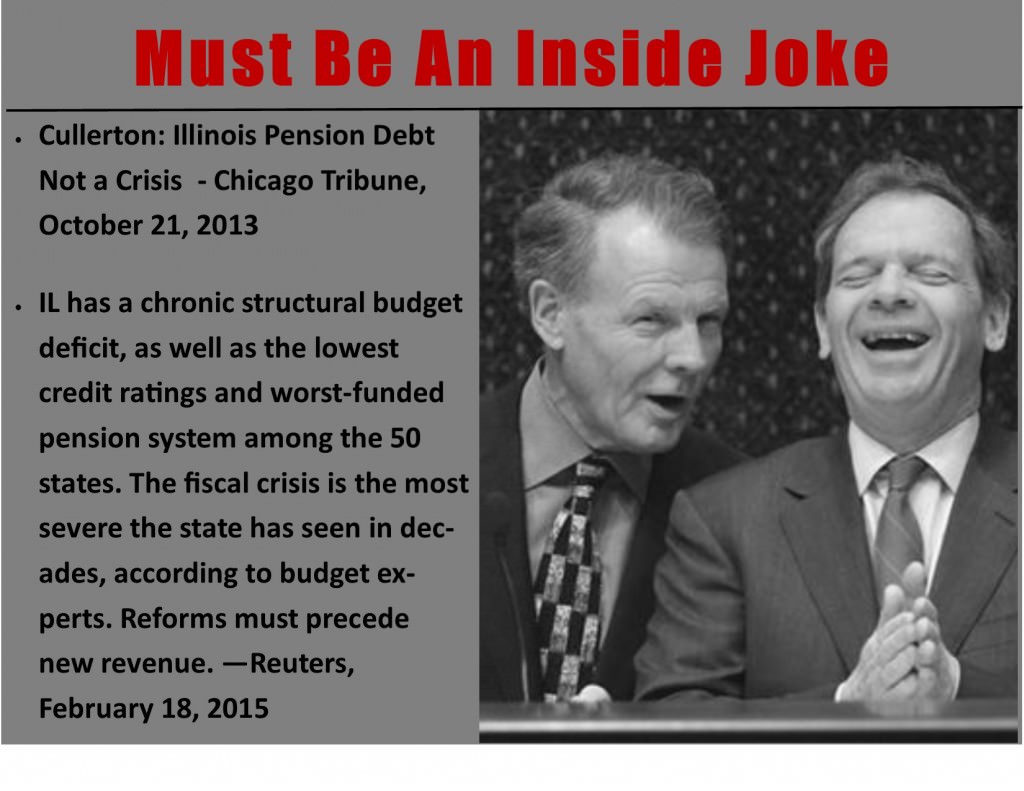 John Cullerton’s smirk is just the most recent expression of what ruling-class liberalism has become in Illinois: an indulgent righteousness; a morality of benefits without work; of achievement without sacrifices; and choice without consequences.

Illinois Democrats tell us of the unfair plight of those at the bottom, focusing on what has been done to them, rather than on what they can do for themselves. They are happy to preach the many ways democracy has failed various segments of our population, but they have forgotten how to speak of greatness – not just the greatness of our state and our nation, but of the individual. The have forgotten the deep reservoir of resilience, earnestness, endurance and optimism that exists in free people.

Just look back at our history. Examples of men and women overcoming tyrannical power-structures and arrogant, mocking rulers leap from the pages:

It’s every great revolt we celebrate, when we saw the outnumbered take the field against bigger, better-armed forces, ready to be massacred so that their children may stand a fighting chance at seeing freedom another day.

It’s the forming of new nations, where we saw bombs bursting in air and the homes of the brave being built on the foundation of liberty.

It’s the race for new lands, where we saw wild horses thundering westward, carrying even wilder men racing to stake their claim for a new life.

It’s the soul of the Civil War, where we saw neighbors divided into blue and grey, battling one another, and yet rising eventually as one to abolish the idea that their fellow man should be enslaved.

It’s the braking of worldly bonds, where we saw two brothers on a homemade flyer slip the constant grasp of gravity.

It’s the drive behind the First World War, where we saw mud- and bloodstained faces armed with nothing but knives, rifles, canteens and a sense of duty, honor and country.

It’s the fight against Hitler, where we saw a tiny, evil tyrant inflicting death and horror upon millions finally destroyed by a band of nations, one led by a free man in a wheelchair.

It’s the greatest dream ever voiced, where we saw thousands march through fearful, hate-filled towns against a wave of pick handles, dogs and fire hoses to listen to one man’s dream to let freedom ring.

It’s that giant leap of mankind, where we transcended our own earthly limits by landing on the moon, coming home to a world that could never again believe in the impossible.

It’s the crumbling of the Berlin Wall, where we saw millions hungering for freedom tearing down the real and metaphorical wall dividing humanity.

This is our story: the quest for more freedom. The achievement of success on our own terms is the ultimate narrative of mankind. With the inspiration, ingenuity, and audacity that is practically coded in our DNA, it is within our power to silence the dull hum of the status quo and the patronizing hiss of a narcissistic ruling class.

Illinois Democrats, like John Cullerton, have spent years instilling doubt and encouraging a sluggish dependency on bureaucracy; instead of incentivizing risk and inspiring innovation. President Cullerton and his counterparts, who laugh at the idea of streamlining government, have manufactured a state in which an overbearing bureaucracy deters dreams and diminishes opportunity. That is no laughing matter.