“Opt out.” That’s the message being sent by the Chicago Teachers Union to families this week, as the state begins administering the Partnership for Assessment of Readiness for College and Careers (PARCC) exam.

Initially, Chicago Public Schools (CPS) attempted to file for an exemption from the new standardized test. The school district backed off when the state threatened to withhold funding for non-compliance. The State Board of Education reasonably believes that including all students in state standardized testing is a matter of fairness and equity. There are also those who might argue that the test will provide a set of metrics to serve as an assessment of the state’s education system.

Chicago Teachers Union (CTU) President Karen Lewis, however, is not one of them. Lewis stated, “This has the potential to blow up and be a tremendous failure, because CPS itself has said the district may not be able to handle a proper rollout at this time due to technical issues and frustration among students, teachers and administration over administering the test properly.” She further stated, “This is another unfunded mandate that comes down to punishing people for being poor.”

While we are encouraged that the CTU president has begun opposing unfunded mandates, we do feel the need to put Ms. Lewis’ argument in context:

1. According to the State Board of Education, per pupil operational spending in CPS is just under $14,000 per student per year. CPS doesn’t have the basic resources to administer a standardized test? Where is their funding going? The second-largest school system in the city, the Catholic schools of the Archdiocese of Chicago has 40,000 students enrolled in city schools at an average cost per student of $7,577. This is a system that graduates 98% of its students, 95% of whom will be considered “college-ready.”

2. While probably not intended, Ms. Lewis makes a good argument for local control of schools. The people living in a given school district have a better understanding of the needs of that district than the state politicians who voted to mandate these tests.

3. Finally, the legislators who put a big government education curriculum, Common Core, in place in Illinois are the very same legislators that the Chicago Teachers Union and the Illinois Education Association has spent hundreds of thousands of dollars supporting.

While the Illinois Opportunity Project opposes a big government model of education and has serious reservations about Common Core, we also oppose the idea that requiring CPS students to take a standardized test is “punishing the poor.” We believe that a far greater detriment to low-income families is an education system that keeps children trapped in schools that will fail to educate them.

Currently, Illinois State Board of Education reports that less than half of CPS students meet state standards and only 26% in the entire district are college-ready. The National Assessment of Educational Progress reports that nearly two-thirds of Illinois 4th graders do not perform at grade level in math or reading.  Unfortunately, many families in Chicago are currently unable to send their children to another school, and are trapped in the city’s failing schools. 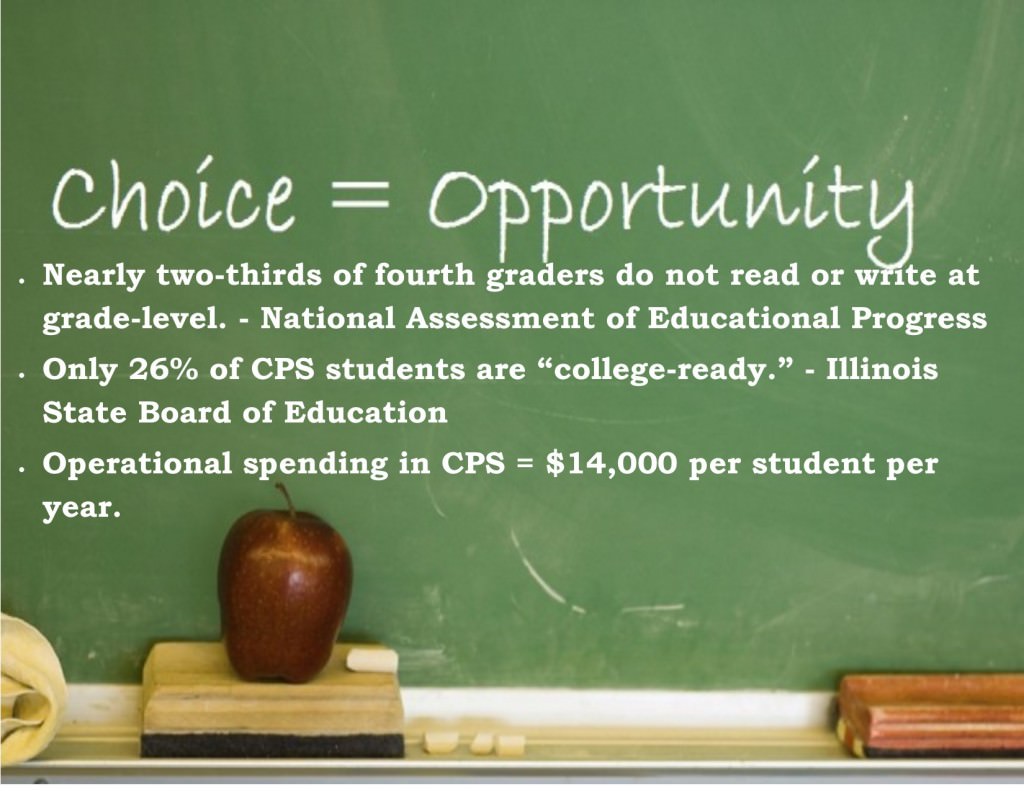 In Indiana, Choice Scholarships — sometimes referred to as vouchers — allow students to use a portion of the money that otherwise would be spent for their education at a public school at a different public or private school of their choosing.

Implementing a similar law in Illinois would put families, as opposed to government bureaucrats, in control their children’s education.

If you are unhappy with the direction of education in Illinois, we have a different solution than the Chicago Teacher’s Union: we want you to “opt-in.” Join our Policy Revolution. Help us advance the ideas and leaders who will stand up to the powerful special interests that keep children in failing schools by donating $25, $50, or $100 today.   Creating equity, efficiency and excellence in our education system will not come from special exceptions or from giving bureaucrats more money and power. These goals can only be met by structurally changing the way we fund education in Illinois and by giving families and students the opportunity to choose an education that best meets their unique needs.