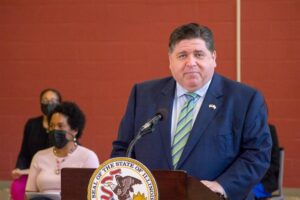 Politicians gathered in Springfield again this week. Two weeks after the official session deadline. With 5 months to work and supermajority control, Gov Pritzker and legislative Democrats still had to kick session into overtime, wasting even more taxpayer dollars.

As we mentioned in our previous blog, they said they had to go back to work on issues mainly related to an elected Chicago school board and a multi-faceted energy bill. Catering to special interests. Turns out they were able to pass the school board bill at the dismay of Chicago Mayor, Lori Lightfoot. But, with the cloud of corruption hanging over ComEd and potential jobs on the chopping block due to green energy mandates, Democrats were unable to force through an energy bill.

Even more embarrassing, Gov. Pritzker surely was thankful they returned to Springfield because legislators made a monumental error in the budget.

They included the wrong dates for the budget! Meaning Illinois departments would not be able to spend money until next year, and forcing a puzzled Pritzker to submit an amendatory veto. And putting an updated spin on “we have to pass the bill to find out what is in it,” or what is embarrassingly not in it in this case.

Incompetence at its finest. That’s what happens when you pass a bill in the middle of the night with little time to review or critique for that matter.

If only Gov. Pritzker used the last two weeks to go further into the budget and search for the missing property tax relief working-class families so desperately need, rescind the $665 million tax on businesses, or tried to find where they missed the appropriation to fund the program at the Chicago Lighthouse for blind adults with disabilities.

That would’ve been an actual good use of taxpayers’ time. Instead, the amateurs who can’t be trusted to include the right dates in a budget, doubled down on to spend more of your hard-earned dollars.

Interestingly enough, Gov. Pritzker did find some extra cash for his vaccine lottery. Pritzker is offering up $10 million which includes “$7 million in cash prizes for adults and $3 million in scholarships for youth distributed through weekly drawings.” Who knew it was that easy to come up with an extra $10 million in this state.

After threatening painful cuts and a 20% income tax hike if his Tax Hike Amendment wasn’t approved by voters, the Governor now claims this budget “marks a significant turning point for our state.”

So which one is it, is the state in dire financial straits in need of a tax hike or is everything going swimmingly as the Governor claims? I guess it depends what Pritzker is campaigning for.

Regardless, voters made the right decision in November and rejected Gov. Pritzker’s cash grab.
All told, another embarrassing week in Springfield for a failing Governor and his enablers.