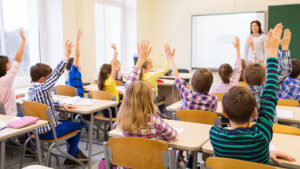 Despite thousands of phone calls and emails from concerned advocates like you, the Democrat members of JCAR blessed the highly-controversial “Culturally Responsive Teaching and Leading Standards” rule change.

Two-thirds of Illinois students are failing to meet expectations in Math and English. Thousands of kids face catastrophic consequences as schools have been unable to find safe ways to open.

Facing these two crises, Gov. Pritzker and his State Board of Education, with the support of their Democratic allies in the House and Senate, prioritized their own political agendas to force politics into classrooms (remote or in-person).

But it did not go unnoticed. This issue went from a backstage bureaucratic measure the other side hoped to sneak through to a national issue that resonated with families across the state. That happened because people like you were willing to stand up.

Your enthusiasm and eagerness on this issue are overwhelming, and your passion for students and teachers across Illinois is evident. Thank you for all the hard work you put into hosting trainings, phone banks, and social media activity driving your neighbors and fellow voters to take action. You made thousands of calls to educate voters and drove hundreds of contacts into the Legislators’ offices. You should be proud of those incredible successes.

The good news is that this fight is not over. Between now and 2025, when this rule change is fully implemented, there are policy issues and election cycles that can change our state’s power structure and future.

There is an opportunity to build upon our successes. Over the next year, we will work together to increase the size of our coalition, educate your friends and neighbors on this issue, and put policy leaders who are willing to stand up for our families and put an end to the state’s same failed system into positions of power.

This is just one of the many policy areas where elected leaders have failed families. We look forward to partnering with you to put more pressure on Gov. Pritzker and the politicians in Springfield. Thank you again for your time and letting us be part of your movement to change the state.

Sign-up here to get involved in our next call to action by making phone calls, knocking doors, or hosting a house meeting.