The Democratic Governors Association’s web site advises that eight governors and three governors-elect are planning to attend the organization’s annual meeting next month in Los Angeles.

As this is written, Illinois Gov. Pat Quinn is not on the list, which is surprising given that the gathering will be hosted by fellow tax-and-spender Jerry Brown. The septuagenarian governor of California just rammed through a series of new tax hikes, including the highest upper income tax rate in the nation (13.3%). That rate makes Illinois’ 5% across-the-board income tax seem paltry by comparison.

Quinn could still wind up joining the governors in LA, yet as forecasts for Illinois’ economic demise continue to roll in, he has every reason to stay close to home. The state’s debt crisis and unfunded pension time bomb are well documented, as is its tenuous credit ratings by the major agencies.

But what Quinn and Illinois lawmakers really need to address is an epic jobs crisis. We’ve seen headlines about companies threatening to leave (a few smaller ones have), or choosing other states for expansion and new facilities, because of our obscenely high corporate tax rate (9.5%), not to mention Quinn’s habit of appeasing only the behemoths by offering incentives unavailable to the little guys.

Yet the real story is the steady erosion of jobs through mass layoffs, forced unpaid leaves or re-location, which keeps the state’s unemployment rate high (8.8%, compared to the national rate of 7.9%) and places ever more strain on working class families. This creates a ripple effect that hits retailers and restaurants in communities where the job losses occur.

Since July of this year, Illinois-based businesses have announced firm plans or dire forecasts that will impact 3,400 jobs, mostly in the form of layoffs.

Not included in that total is Caterpillar’s workforce. The Peoria-based company in October announced sweeping temporary layoffs, all coming just as the holiday season arrives. Caterpillar’s Decatur plant will see 20 percent of its employees forced to take unpaid leave for one week between now and the end of the year. Ho, ho, ho.

And the news keeps getting worse. With the demise of bankrupt Hostess now all but certain owed to a standoff with its bakers’ union, three Illinois plants and nearly 1,400 jobs likely will vanish. That would take the state’s 2012 jobs-on-the-block total to 4,800.

To be fair, not all of the jobs cut in Illinois can be attributed 100% to the state’s oppressive taxes, regulations, and unions. As an example, Motorola Mobility in August announced it will layoff 700 workers in Libertyville and Chicago (23% of its local workforce) as a result of restructuring imposed by its new owner, Google. The decision does not affect the company’s plan to relocate all of its remaining employees from Libertyville to the Merchandise Mart in Chicago next year.

Motorola Mobility aside, the downward trend – job insecurity or cuts instead of job growth – is not merely a 2012 development. In fact, the exodus of jobs and people has been ongoing. Lest we forget just last year 10 businesses across the state closed facilities and cut or outsourced jobs, including the Chicago Sun-Times, Schofield Media and Consolidated Container.

There are no easy solutions to ending the cuts and closures. But there are many examples around the country that provide encouragement. They almost always revolve around fiscal policy, tax reform, and concessions by long entrenched labor unions.

The governors of Minnesota, Missouri, and Vermont are among the confirmed attendees for the Dec. 3-4 DGA annual meeting out west. The unemployment rates in those states are 5.8%, 6.9% and 5.4%, respectively. None are bastions of fiscal conservatism, yet they seem to be doing something right. Bi-partisanship comes to mind.

Despite the potentially poor optics of Gov. Quinn hobnobbing with fellow governors in sunny Beverly Hills as Illinois citizens shiver amid December’s wintry grip, he might pick up a few pointers. 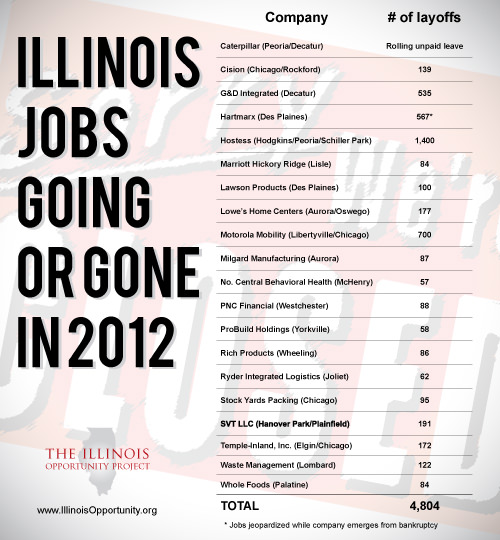 In 2011, 10 businesses slashed jobs or disappeared