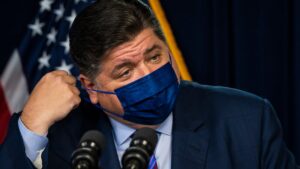 By: Mark Cavers and Katie Clancy

Gov. Pritzker has repeatedly defended his COVID response and mitigation efforts claiming his actions have always been motivated by science and not politics. Those who have been paying attention for the last year and a half know he has been nothing but political.

He has used COVID as an excuse for his policy failings, he’s dodged responsibility at every turn, leveraged every opportunity to use the pandemic as a political tool to bludgeon his opponents and shore up his own reelection campaign, and has already spent hundreds of thousands of dollars running campaign ads touting his role in the crisis.

With an unprecedented uptick in crime and violence ravaging Chicago, Pritzker, without a solution or even seemingly a care, blamed COVID. He used COVID as an excuse to raise taxes and cloak his class warfare. Amid the pandemic, he pushed his progressive tax saying we, “need it now more than ever.”

The hallmark of a good leader is taking responsibility. Unfortunately, Pritzker has done the opposite. Rather than looking for solutions, he seeks out scapegoats.

From the beginning of the pandemic, he was quick to blame the federal government, and all his political opponents for the spread of the virus and the fair criticisms waged against him. In an interview with WBEZ marking one year into this crisis, Gov. Pritzker continued to deflect and blame Republicans. But what Pritzker fails to mention is that he has been acting unilaterally since the crisis began.

Pritzker has spent the better part of the last year hosting press conferences as his main tool to fight the spread of COVID. It seems he’s learned from former Mayor Rahm Emanuel’s notorious “governing by press-release approach.”

But these “pseudo-events,” as Daniel Boorstin called them, don’t help stop the spread. They don’t advance science or help the medical community. At best, they keep voters informed and help shape public opinion. For Gov. Pritzker, they provided a daily stage to play the part of a courageous and in-control leader while the virus savaged his state-run veterans’ homes and senior care centers.

Worse, the Governor didn’t use the daily media attention to build bridges to under-vaccinated communities, develop trust among Illinoisans, or lay out a shared vision and bring hesitant Illinoisans along by addressing questions and concerns. Instead, he used his press conferences to browbeat political opponents, denigrate alternative perspectives, and mock those who question him as “carnival-barkers.”

Pritzker also took Emanuel’s admonition that “you never want a serious crisis to go to waste,” to heart. He used the pandemic to declare 20 emergency proclamations in a row, purposely taking any power away from the General Assembly and squelching debate. He provided cover for obscure Democrat members who showed they are in Springfield to cash a check, not govern the state.

This has been Pritzker’s strategy from the beginning: Act alone, consolidate power, and blame others for the failures that ensue. Instead of putting forth a unifying message, Gov. Pritzker has been a force of division.

It’s not him who wants an indoor mask mandate statewide; it’s those who are still hesitant to get vaccinated who are at fault. It’s not him that wants to keep schools closed or make young children wear masks all day; it’s the parents’ fault who want to see the science behind the strategy and dare to show up at a meeting and question their school boards. They are the ones that are making this harder than it has to be. He’s not the bad guy. Everyone else is.

Pritzker’s tired “it’s not me, it’s you” routine is why he has lost “buy-in” from citizens across the state.

But he doesn’t seem to care. His goal appears to be to convince 50%+1 of the population to re-elect him. With his failing record, “Strong Leadership” on COVID is the poll-tested platform his high-paid media consultants have landed on. So, like an ambulance-chasing trial lawyer, he races across the state with a camera crew in tow cutting ads with physicians, nurses, and bourbon distillers.

Pritzker won’t give actual metrics as to when it is appropriate to impose a mask mandate and when it is no longer necessary. He can’t be bothered to explain for the confused and incredulous why Lollapalooza can proceed with hundreds of thousands of people a day with no masks.

Pritzker doesn’t care to answer questions, and that’s why the COVID response is failing in Illinois. But his campaign manager can surely explain why they spend $125,000 a week on television ads.

Our Governor is the one who made the pandemic response political for his own electoral gain. He uses it to explain away failures, attack opponents, and elevate himself.

But, unfortunately, his inability to lead, be truthful, and work with people who don’t always agree with him, has disenfranchised many voices in the state. Whether it’s more COVID closures or mandates, another tax hike, or even his flip-flop on legislative maps, Illinoisans have lost all trust in him and state government.

Pritzker may not have a plan to stop the spread, but you can watch his next press conference on the evening news, and you may even catch one of his campaign ads during the commercial break.