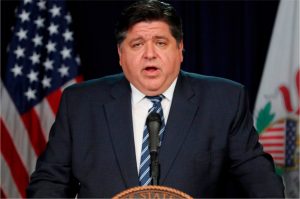 Governor J.B. Pritzker cannot seem to make up his mind: Is the coronavirus still a massive threat to Illinois?  You’ve all seen the memes on social media. “You can do this, but you can’t do that.”

The memes hurt because the weird juxtaposition of the two options side by side seems like we live in an alternative universe. No one in their right mind would put these choices together. But here we are and the reality is that we’re living in Pritzker’s universe. The one he and only he gets to rule. According to him.

Just last month, the Governor wanted to punish small business owners who opened their doors prematurely. He filed an executive order, without consulting the Illinois General Assembly, that could result in misdemeanor charges for any small businesses violating the stay-at-home order.

Fast forward to last week, and the Governor seemed to have no problem with the crowds of thousands looting and violently protesting throughout Chicago and the surrounding suburbs. Not only is this particularly harmful to small businesses already suffering, but what would have been considered an extreme COVID hazard just days ago is being completely overlooked by the Governor.

Furthermore, he continues to enforce restrictions, despite restaurants and stores putting a number of protective actions into play. The riots are far more careless and unpredictable when it comes to the spread of COVID.

In the most recent display of the Governor’s hypocrisy, he has joined the protests. Rather than stay safely in his office working to implement change in our state, which he has the power to do, he has chosen to opt instead for a public show. It is almost comical: He is the one in a few million with the sole ability to make real change, yet he prefers to stand in “solidarity” for a photo-op.

Smile if you want to “Defund Police!”

Is this because he wants to support the movement? Or because he doesn’t care much about the lives of Illinoisans at all, so long as his politics are supported? Or, perhaps, the threat of the coronavirus is not quite as imminent as he had us believing for months.

The Governor has moved the goalposts more than once. He tries to be a man of the people, yet fails to hold himself to the same standards to which he holds the rest of Illinois.

Lastly, let’s look at the budget he signed this week. He says we need his precious Progressive Tax “now more than ever,” but the FY 2021 budget has 7.5% higher spending than the previous budget passed last year. You need the money, but you’re willing to spend more? Which is it? Make up your mind.

“Since taking office, my administration has prioritized effective and efficient government,” Pritzker said Wednesday. There’s nothing efficient about throwing away $17 million on defective masks from China.

The Governor has failed yet again to be consistent. The reality is: Pritzker is the biggest threat to Illinois no matter what side of his mouth he’s talking out of.

To join our efforts and prevent failed-Governor J.B. Pritzker from garnering more power and more of your hard-earned money, take action here: