Today during his budget address, Governor Rauner gave an honest assessment of the severity of the state’s budget crisis.  And for the first time in well over a decade, an Illinois Governor laid out a balanced plan to confront an unprecedented fiscal crisis that requires state government to operate within its means.

Democrats in the House, Senate and Governor’s office—with help from some complicit and/or unprincipled Republicans—have placed Illinois’ fiscal health in critical condition.  They spent years racking up unsustainable debt so they could cater to the demands of organized and politically powerful special interests.  Our security, our prosperity, our freedom and our future are more at risk today than ever before.  We have no choice but to abandon the crumbling status quo.

As a result, the most important policy imperative facing Governor Rauner, and the veto proof Democrat majorities in both chambers of the General Assembly, is to pass a truly balanced budget.  A budget that is honest and free of the financial gimmicks that have plagued past budgets.  A budget that recognizes Illinois has a spending problem, not a revenue problem – as just last year the state had over $5 billion in unpaid bills despite record revenue.  A budget that seeks to rehabilitate Illinois’ worst in the nation credit rating.

And most of all, a budget that ensures that taxpayer dollars are spent wisely so that the state’s critical services are not jeopardized.  This is both an economic and moral imperative that the recent ruling class in Springfield has ignored.  For example: 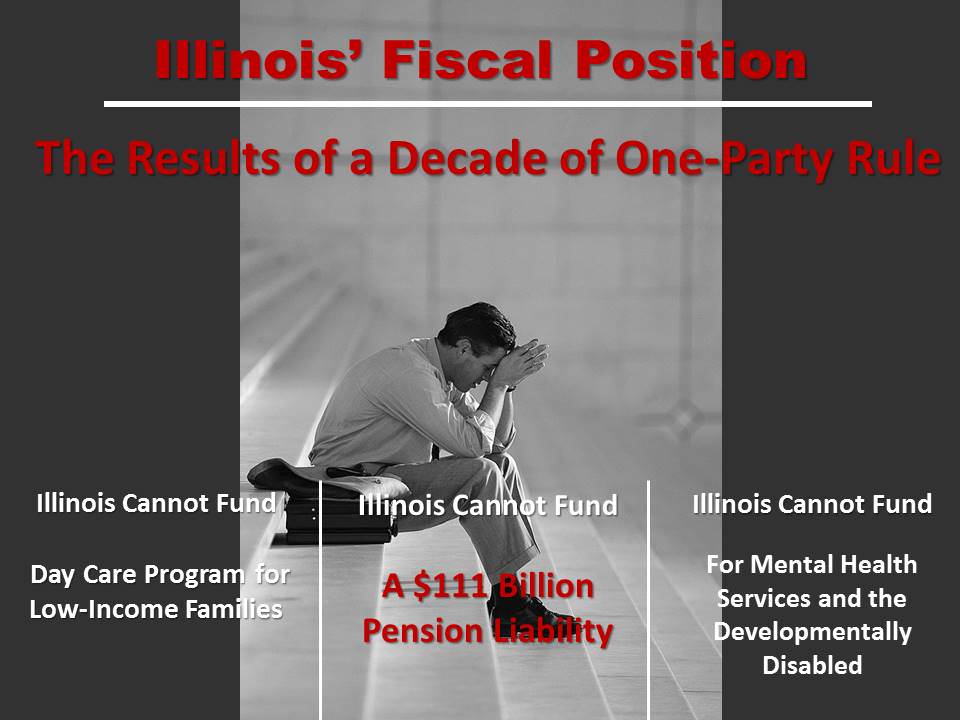 Yet, the Democrat veto proof majorities steam ahead at full speed to expand Medicaid; increase funding to a K-12 education system that fails to educate children; protect a state retirement system that we will never be able to afford; and jeopardize the well-being of those truly in need.

But there is good news.  Based on his budget address, Governor Rauner appears ready to provide a political and policy counterweight to a Springfield ruling class that refuses to truly acknowledge, much less address, the peril in which they have placed our state.  At the same time, the Governor recognized that until we implement policies that expand opportunity, encourage investment, promote growth and reward entrepreneurship, Illinois will never recover.

In his budget address:

As we have always done, the Illinois Opportunity Project will continue to call on the General Assembly to face Illinois’ problems with pragmatism and political courage; to cut unnecessary spending immediately and keep future spending in line with state revenue.

Join our Policy Revolution by supporting a compassionate and principled approach to the state budget by donating $25, $50, or $100 today.  Together, we can put in place predictable, long term policies that will leverage Illinois’ competitive advantages and lead to economic growth, opportunity and prosperity for all Illinoisans.