The Illinois Supreme Court recently ruled that the state constitution prevents any diminishment of health care benefits for retired state employees. The ruling is ominous for the future of practical pension reform and the quality of life for all Illinoisans.

The pension system is unsustainable at the state level. Therefore, without the necessary reforms, the most likely play by the political establishment will be to push retirements back to municipalities without making any changes to the plans or giving local governments added flexibility. We know that about 80% of municipalities are in critical condition. Without meaningful pension reform, the Illinois Supreme Court, political leaders and public sector unions (the Illinois Ruling Class) have shattered the retirement security of state workers. Want to see how this ends? Take a good look at Detroit.

To date, the message from those who uphold the status quo in Illinois to reform-minded legislators has been: Confront public-sector unions at your peril.

Yet confront them as policymakers, they must. As Chris Christie said of his duel with the NJEA, “If we don’t win this fight, there’s no other fight left.” The cost of public-sector pay and benefits, combined with billions of dollars in unfunded pension liabilities for retired government workers, are weighing down state and city budgets. 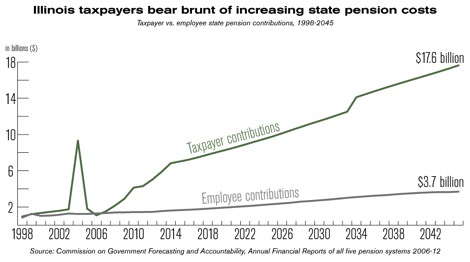 Fixing problems of this scale, where the political price is immediate while the benefits are stretched out over decades, is never easy. But for each day that passes without major reforms, the mathematics of the pension crisis grind on: ever more retirees, collecting steadily larger checks, as tumbling bond ratings make it more and more expensive to borrow money to mask the hole

Illinois has traditionally been the economic engine of America’s Heartland.  Bad fiscal policies, however, are obscuring our competitive advantages and destroying Illinois’ future. At Illinois Opportunity Project, the policies we advocates, as well as the candidates and legislators we support, champion thoughtful, long-term, reform-focused solutions. Join our Policy Revolution at illinoisopportunity.org.