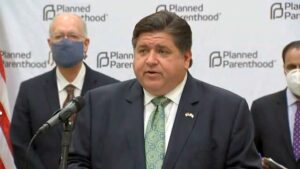 As pro-life families celebrate the potential repeal of the Roe v. Wade decision, Gov. Pritzker is focused on the issue instead of the daily concerns that Illinoisans care about.

Families are suffering from the highest inflation rates in almost 40 years. Cities like Chicago are experiencing spikes in crime and surpassing record homicide rates. Families have had their eyes opened to the quality of their children’s education.

Just five days ago, a new NPR/PBS NewsHour/Marist poll revealed that 47% of voters said they are more likely to vote for the Republican in their district, as opposed to 44% who said Democrats. This is the first time Republicans have been ahead in the polls since 2014.

After an unpublished Supreme Court opinion that would overturn Roe v. Wade was leaked, too many legislators are desperate to change the conversation.

Legislators nationwide and especially in Illinois are failing on the economy, crime, and education standards. Now they believe they have a platform they can campaign on: a progressive social agenda.

This is the type of “flashy” agenda that Gov. Pritzker wants to run on. An agenda that gets his tweets featured on national news, that fires up his progressive base, and that distracts from his failed governing record.

The only problem? The majority of citizens don’t agree with Gov. Pritzker’s radical abortion agenda.

According to a poll from last year, 72% of Illinoisans, including 58% of prochoice Illinoisans, supported maintaining parental notice for abortion, a common-sense safeguard that Gov. Pritzker and legislative Democrats undid last year.

Gov. Pritzker’s policies haven’t lowered taxes or improved the state’s fiscal health because he hiked dozens of taxes and fees. His policies haven’t led to good governance instead they have defended and supported Mike Madigan for years. He knows his policies failed by forcing schools to stay closed while students fell behind.

Pritzker’s policies alienated law enforcement officials who serve and protect our communities everyday. He favored positive press from national media on ending bail reform rather than caring about the safety concerns from local families.

Gov. Pritzker would rather turn his attention to a federal issue that is drawing a lot of fanfare from the D.C. and Chicago Press Corps than deal with the issues that Illinois families are dealing with. But, this polling suggests he can’t even run on the abortion issue cleanly.

Although Gov. Pritzker may see an opening to flip the script on his failed governance, our advocacy team has been educating citizens on his failures for over three years.

Don’t let Gov. Pritzker distract citizens from his failed governing record or spin his radical agenda. Call Gov. Pritzker’s office today to tell him to focus on Illinois’ issues and join our team to change the state and improve the lives of Illinois families: