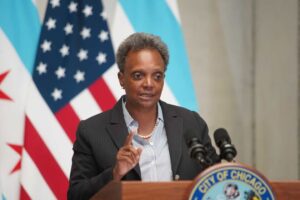 The tax increase will take $42 million out of taxpayers’ pockets and move it into City coffers.

The City already spends billions of your dollars. So what are you getting for it?

30% of students are chronically absent – meaning they miss more than 10% of school days.

By conservative estimates, the District spends $17,000 per student for these abysmal results.

But this next property tax hike won’t improve student outcomes.

In 2021 over 400,000 emergency calls to the police went unanswered because there were no police to respond, according to Wirepoints, INC.

But, this next property tax hike won’t ensure there are police available to respond to emergencies.

According to the Mayor’s budget documents, the tax hike “will result in an additional $42.7 million in property taxes that will support pension obligations.”

And that is the issue. For over a generation, Chicago families have seen taxes and fees increase while City services deteriorate. Chicago property taxes have doubled over the last twenty years. The vehicle sticker fee increases every two years. Parking meter fees are routinely increased, and Lightfoot added 1,800 more meters.

Chicagoans are feeling the pain and speaking out:

“With the benefits of living in Chicago becoming more difficult to enumerate and skyrocketing property taxes making it unaffordable, the only choice my family has is to leave. I will miss the City as it used to be but will certainly not miss what it has become.”

Families should have another choice: a City that respects their hard work and spends their money wisely.