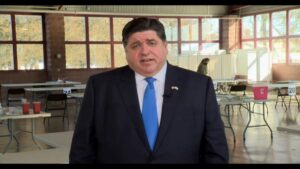 Even though there was no session this week, it was a big news week for Illinois politics!

First off, thank you again to all the volunteers who took the time to call members of the Joint Committee on Legislative Rules. A special thanks to those who went above and beyond and called voters urging them to contact their legislator. Unfortunately, we didn’t get the outcome we worked for. Still, it was inspiring to see how quickly Illinoisans from across the state mobilized and made their voices heard against this policy to put politics in the classroom.

On Wednesday, Gov. Pritzker gave his combined, pre-recorded State of the State and Budget Address. It won’t come as a shock to engaged citizens like you, but Gov. Pritzker proposed an unbalanced budget for the third year in a row. He is doubling down on the failed high tax and big spend policies that have driven families and jobs out of the state for seven consecutive years.

What was even more disheartening was his blatant partisan attacks during this time of crisis: children are stuck in remote learning, the state suffered the worst job losses on record, and seniors and immunocompromised Illinoisans are scrambling to get the COVID-19 vaccine.

People are looking for a solution-oriented leader who will build the state’s economy and drive hope for financial growth. Governor Pritzker had the chance to rise to the moment. Instead he sunk to partisan bickering and throwing blame at his political opponents.

The School Choice movement is taking off all over the country after the national teachers unions’ outrageous demands were exposed. Yet here at home, Pritzker rewarded the unions and started defunding the Tax Credit Scholarship Program. This program empowers low-income families to escape failing schools and gives them the ability to choose the best educational opportunity for their children.

But that’s exactly what the Pritzker Playbook has been. He wants to be the Governor but doesn’t actually want to govern.

Another great example of his reluctance to lead was his response to the breaking news this week that disgraced former Speaker of the House, Mike Madigan, is resigning. While Democratic members of the House were calling for him to resign last year for his unethical behavior in the ComEd bribery scandal, Gov. Pritzker issued a statement praising Madigan saying, “The people of Illinois have much to be grateful for thanks to his dedicated public service.”

A similar statement from his Lt. Governor Juliana Stratton: “He leaves a legacy of service and sacrifice that is to be admired and is deserving of our gratitude.”

Even before the bombshell ComEd scandal Madigan had a 71% disapproval rating from voters statewide.

Gov. Pritzker’s actions and out of touch behavior continue to add to the list of reasons why he does not deserve another term to govern the state of Illinois. Every time he addresses the people of Illinois, he reveals his unwillingness to take responsibility and lead.

He blamed the “millionaires and billionaires” for the failure of his Tax Hike Amendment. The “far right” for his inability to control the spread of COVID-19 that killed American heroes at the LaSalle veterans home and punishing small business owners at the same time.

He even continues to blame the Trump Administration for Illinois’ hectic and confusing COVID-19 vaccination rollout that seniors and high risk individuals are yearning to receive as other states have figured it out.

It was another eye-opening week revealing the failures and vindictiveness of the political class in Springfield.

To end on a high note, the fight is not lost. We have until 2022 to form coalitions, make voter contacts, and support good reform-minded leaders to defeat Gov. Pritzker and strengthen the House and Senate Caucuses.

With your continued support and advocacy, you will be able to change the state and we look forward to working alongside you to reach that goal.