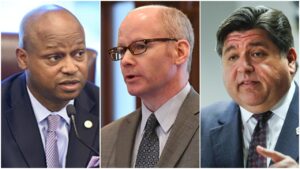 Gov. Pritzker wants to use money from the “Local Government Distributive Fund” to close his massive budget hole.

Mayors from the Chicagoland region held a press conference this week demanding Pritzker keep his hands off those funds that belong to their constituents.

Local governments are handcuffed with Springfield mandates that they can’t afford and that drive up property taxes.

Springfield and Gov. Pritzker can’t have it both ways. They can’t force unfunded mandates on local governments and be allowed to keep dipping in their funds due to their own fiscal mismanagement of the state.

Springfield politicians spend more than we can afford. Voters know that. That’s why they rejected Pritzker’s Tax Hike Amendment and demanded reform. But even before this tax hike was on the ballot, Gov. Pritzker pushed 19 tax and fee hikes in his previous budget.

One of the most egregious was the $100 fee hike on trailers.

Despite having enough support to send legislation to the House Floor to rescind the absurd fee, it remains stuck in committee.

House Bill 636 has 62 sponsors. Two more than are needed to pass.

State Rep. Mike Zalewski, chairman of the committee, says he can’t let the bill pass without another funding mechanism to offset the losses.

Have these politicians learned nothing?

Higher taxes do not lead to economic growth in Illinois. In fact, Illinois’ reckless spending and high taxes are driving out families and businesses in record numbers.

Voters demanded reform when they rejected Pritzker’s Tax Hike Amendment. But politicians like Rep. Zalewski and Gov. Pritzker continue to demonstrate that they did not take the hint.

Another hint that was taken far too late was the enactment of term limits on legislative leaders. This legislation, passed in the House on Thursday, comes off the heels of Speaker Madigan’s reign that lasted close to 40 years.

Better late than never? Before we congratulate the Legislature, the bill still needs to pass the Senate and Pritzker needs to sign it.

As the General Assembly begins to ramp up for the next five weeks, we remain committed to keeping you informed.

Sign-up below to get involved and be the first to know when advocacy opportunities arise: