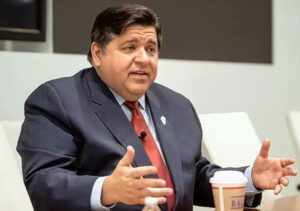 Gov. Pritzker announced his reelection campaign with a disingenuous video that included Southern Illinoisans. I say disingenuous because, despite their prominent placement, these hand-picked stars don’t represent the majority of downstate voters.

In 2018, sixty percent of downstate voters rejected JB Pritzker by casting their ballot for a different candidate for Governor. Then in 2020, after two years of raising taxes and buddying up with Mike Madigan, an overwhelming majority of 67% rejected Pritzker’s cornerstone policy issue, the Tax Hike Amendment.

This rejection of Gov. Pritzker is driven by opposition to his progressive policy agenda and his Chicago-size-fits-all governing model.

Gov. Pritzker has aggressively tried to fulfill his promise to make Illinois the “most progressive state in the nation.” But, unfortunately, from promoting unlimited abortion rights to injecting politics into classrooms, Pritzker has doubled down on a progressive policy agenda that is contrary to Southern Illinois values.

To take just one example, 78% of downstate voters have a favorable view of the police, according to that same survey from 1892 Polling. Yet, one of Pritzker’s cornerstone reelection issues is legislation he championed which critics say will defund the police.

On the economic front, Pritzker’s war on coal would shutter every coal plant costing Southern Illinois hundreds of good-paying jobs.

High gas prices are particularly painful for rural families who drive greater distances to and from work and town. Despite this, Gov. Pritzker pushed through 19 tax and fee hikes in his first year, including a doubling of the gas tax, which will in part fund Chicago mass transit projects. Drivers in Madison or St. Clair counties feel this pain every day when they pay between $3.30 to $3.35 a gallon for gas, while their friends in Missouri are paying $2.87.

Pritzker’s refusal to reform government pensions or provide property tax relief is painful for Metro-East families who pay $1,200 more in property taxes on a per capita basis than their neighbors in Missouri.

One of Illinois’ strengths is its economic and regional diversity. Yet, instead of embracing this diversity through a regional approach and bipartisan compromises, Pritzker has pursued a Chicago-size-fits-all governing model that treats Southern Illinois communities the same as the Chicago Loop.

Pritzker pushed through a minimum wage hike that ignored bipartisan pleas for slower regional implementation that would have given a cushion to downstate manufacturers where the cost of living is drastically different from Chicago.

Faced with the COVID pandemic, Pritzker used his emergency powers to force uniform lockdowns across the State. He refused to listen to the downstate voices calling for flexible measures to consider the population density differences between rural farm towns and population centers like Pritzker’s own Gold Coast neighborhood.

Illinois is more than just Chicago. Families who live in Madison County have different economic needs and values than those that live on Chicago’s Mag Mile.

A governor for all Illinoisans would balance these economic and cultural differences and celebrate the State’s regional diversity. Three years in office has shown that Chicago’s Governor JB Pritzker doesn’t care for Southern Illinois values or priorities. Don’t let his misleading campaign ads convince you otherwise.