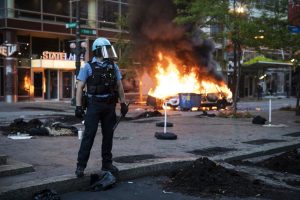 Governor Pritzker and President Trump do not get along, but that is old news. Back in March, the President called Gov. Pritzker out for his subpar leadership. He did the same thing on a call with all the governors on Monday. This trend is unlikely to end any time soon, especially since the Governor continues focusing on Twitter fights and cable news appearances while ignoring the violent demonstrations happening in his own state.

On Thursday, President Trump tweeted in response to the death of George Floyd. It was met with anger from many, including Twitter headquarters, who put a warning on the tweet claiming it was “glorifying violence.” But Twitter was not the only one to have an extreme opinion on the situation. On Friday May 26th, Governor Pritzker spoke out in a press conference, calling the President a “racist, misogynist homophobe.” He repeated this rhetoric hours later on Twitter. Following suit was Chicago Mayor Lori Lightfoot who said in a press conference, “And I will code what I really want to say to Donald Trump. It’s two words. It begins with F. It ends with U.”

These are our fearless leaders.

While Gov. Pritzker attacked the President, protestors were filling the streets, rioters were inflicting damage, and instigators were celebrating a wild and dangerous weekend of violence. Instead of making the call for the National Guard on Friday, Pritzker was probably staring at his phone, likely waiting for a reply or a call from a CNN producer, people were dying. Could this violence have been prevented? Absolutely.

Instead, the Governor was focused on politics and making sure the President knew that he was gravely unhappy with his leadership. Pritzker’s leadership, however, is the one that should be questioned. Because of his dismissal of legitimate threats and desire to bully the President:

*Countless stores in the Loop were looted. Windows were broken. People were hurt.

*When the police force entered the city to calm the riots, they were met with hatred and aggression. Police vehicles were set on fire and turned upside down. Agitators threw projectiles at the police.

*An American flag was set on fire.

*There were 92 people shot in Chicago. Among them, 27 were killed.

48 hours later, on Sunday afternoon at approximately 11:50 AM, the Governor called upon the Illinois National Guard at the request of Mayor Lightfoot. Had he made this move just two days earlier, lives would have been spared and the city of Chicago and surrounding suburbs would not have suffered such severe and extensive damage.

Small business owners like Rosie Alvarez, owner of a martial arts studio in Aurora, were excited to finally be reopening the doors to their clients after barely surviving through the pandemic, but instead, she’ll have to clean up the mess and assess the damages and costs to her property.

Adryenne Alvarez, who owns an OrangeTheory fitness studio downtown with her husband, Ralph, was hoping to reopen in late June. She was appalled to find her husband unconscious in front of a large crowd when she went to check on the damage to her studio. While begging for help and trying to wake him, she was hit in the back of the head with a crowbar. Their recovery and the extensive damage to their studio is sure to slow the reopening process.

Barrio, a restaurant in River North, was hoping to reopen its outdoor patio on Wednesday. Executive chef Andrew Sikkelerus says that many plans were in place to follow guidelines and stay safe. After the restaurant’s windows were smashed during Saturday night’s protests, however, the celebratory reopening is potentially postponed.

Dozens of small businesses are experiencing similar setbacks as a result of looting and break-ins. A time that should be exciting has become even more detrimental to these businesses desperate to stay afloat. After the Governor’s extended stay-at-home order, which harmed small business owners immensely, his failure to enact protection with the National Guard earlier has caused even more financial and emotional pain.

Governor Pritzker is a self-proclaimed leader who swears that he cares about Illinois and the millions who live here. Despite this, he continues to add insult to injury by doing nothing to protect the livelihoods and businesses that have been continuously destroyed throughout the past few months and continues to advocate for his progressive tax that will serve as another dagger on the struggling small business community. Now, more than ever, we must speak out against the corruption and destruction that results from the carelessness of him and his administration.