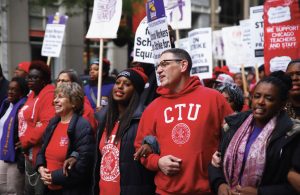 For decades, Chicago Teachers Union members have failed to educate Chicago’s youth, while simultaneously demanding higher pay and better benefits. This past fall, they went on strike for 11 days, costing classroom time for students and burdening parents.

Now Chicago Public Schools have been out of school for months and will be for the foreseeable future because of the COVID-19 pandemic. Looking back, the lack of classroom instruction due to the strike and the closures, may cause irreparable damage to students’ educational futures.

CTU is known for its radical agenda that boasts about the leadership of dictators like Nicholas Maduro on a trip members took to the poverty-stricken, socialist country, but their newest “social justice” venture is to hop on the anti-police bandwagon and demand officers are taken out of local schools.

They opportunistically join the chants of “defund the police” even though it may put students and faculty at more risk and proudly plan to rally on June 24th with the theme: “reopen schools without COVID or cops.”

That is because the union has put its political agenda ahead of helping children. During last year’s strike one teacher explained: “The kids are the ones losing. I just feel the union has the responsibility, and that they’re using the kids.”

After this years-long betrayal of children who were left in their care, the CTU was the only organization in the City not to participate in the urgent need to reform. “The Chicago Teachers Union President is the only person we contacted who failed to respond to our inquiries.”

What kind of organization displays such disregard for children’s safety and education?

The kind you pay for year after year with no accountability.

All Illinoisans are on the hook for the reckless ideology of CTU members. Despite CPS’ shrinking enrollment, state taxpayers are forced to foot the bill for their bankrupt pension system and the special $200 million annual payment only given to Chicago Public Schools.

But they aren’t going to stop there. They are demanding more of your hard-earned dollars as one of the biggest cheerleaders for passage of the graduated income tax on the ballot in November. Do you want more of your money supporting radical, political groups like CTU?

We can’t keep sending more tax dollars to bankrupt systems like the Chicago Public Schools that betray the children they should be protecting and educating.

Demand reform to these organizations. Stop propping up both morally and fiscally bankrupt government systems.