The fact that EDGE Tax Credits and other sweetheart business deals exist serves as an admission by Springfield’s anti-business ruling class that, at some level, they understand it is business that creates jobs, spurs employment and grows the economy – unlike their preferred methods of redistribution and welfare.  They have staunchly denied their understanding of that truth, however, opting to slip tax carve-outs to select businesses through EDGE credits, instead of advocating for the tax, budget and spending reforms being implemented by our neighbors in Indiana and Wisconsin. Such reforms could have made Illinois’ economy a driving force in the Midwest.

Robert Steere, Senior Budget Advisor at the Illinois Policy Institute, reported recently that Illinois has given companies more than $830 billion in EDGE credits since 1999. One of those companies was Sears Holdings, who recently announced more closings in Illinois despite their sweetheart deal.

The effectiveness of EDGE credits has been in question since their inception. This is so, in large part, because the credits help so few companies.  In 2013, the US Census Bureau estimated that, since 1999, of the over 1.1 million companies operating in Illinois, only 237 firms had received the $207.5 million in standard EDGE credits, while 10 of those companies have received $66 million more in enhanced EDGE credits.  Not surprisingly, the fact that the EDGE credits appear to serve only the politically and financially privileged few did not dissuade the powers that be in Springfield from doubling down on their largesse.  From 1999 to 2013, the number of EDGE credit grants increased, as did the amount awarded.  The number of credits given in 2011 doubled the number given in 2010 to help the chosen few cope with the 2011 tax increase borne by the rest of us. 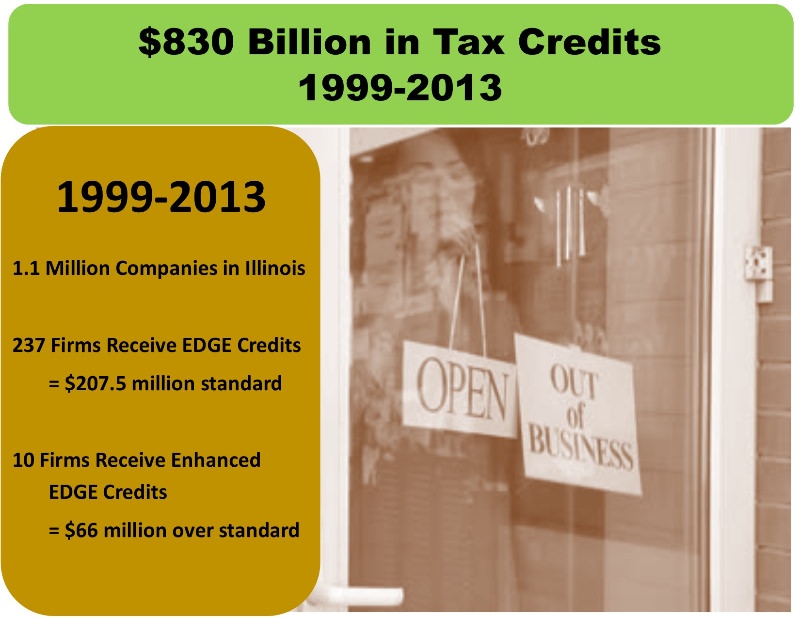 Of course, bureaucrats in Springfield shouldn’t be picking winners and losers in a competitive economy.  Sears Holdings Corp. – one of the major recipients of the tax-payer funded EDGE credits – is a prime example of why this is true.

Sears has been receiving tax dollars from the State of Illinois for years. In 2011, Sears and Illinois closed a deal that gave the company tax credits worth $15 million a year for 10 years.

The 2011 deal also extended a special taxing district that reduced the company’s local property tax bill by approximately $14 million a year for an additional 15 years. This taxing district was enacted as a way to convince Sears not to leave Illinois.

Despite the giveaways, the retail giant has been fighting to remain competitive and regain market-share for years.  On January 21, the company announced the closure of its State Street location. This was followed by the revelation that company would close a minimum of 130 stores in 2014.

We would have been far better off if Illinois’ economic policies over the past 15 years had focused on creating an environment conducive to growth, with reduced barriers to entry. Illinois has all the right components to be an economic powerhouse, but we need leaders in state government who understand, first, that businesses create jobs and, second, how businesses make decisions. We need advocates for policies that cultivate economic growth across the board, as opposed to policies that allow politicians to try to pick winners and losers.

On November 4, we will have a chance to elect new leaders to the Illinois General Assembly. Learn about your local candidates’ positions on business policies. Let’s build balance in Springfield with reformers who will make it their business to advance a comprehensive policy approach that will restore economic opportunity in Illinois. Once and for all, let’s say goodbye to sweetheart deals and special carve-outs, like EDGE credits, that have come to exemplify the destructive public policy of the past 15 years. As the song says, “It’s time to go.”