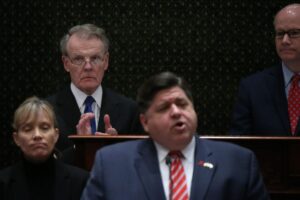 Last week, Mike Madigan’s closest confidant, Mike McClain, and three others were arraigned for their alleged involvement in the ComEd bribery scandal. All four plead not guilty and are set to appear again in court on February 16, 2021.

Mike Madigan’s support is starting to plummet amongst Democrats in the House, including a member of his leadership team, State Rep. Kathleen Willis (D-Addison). They clearly see the writing on the wall and now find it best to show their opposition to the powerful Speaker. Most of the 19 Democratic Legislators calling for his resignation stood silent as scandal after scandal piled up, and most notably, serious allegations of sexual harassment against core members of his team.

But more importantly, who are the people that still remain silent on the issue?

Gov. Pritzker is at the top of that list. For years, Pritzker has refused to call for Madigan’s resignation.

The culture of corruption has run rampant under Mike Madigan’s leadership and Democrat control of State Government. Madigan has stayed in power because of weak political followers like Gov. Pritzker who have stood silently by and benefited politically from Madigan’s power. For decades, the political power structure in Illinois has served special interests and the self-interests of the political party in charge.

From the moment Gov. Pritzker took office, he was under investigation for ripping out the toilets from his Gold Coast mansion to reduce his property taxes. One of his greatest legislative accomplishments was the Capital Bill that doubled the gas tax and was championed by a Senator who was later indicted for bribery.

Nine months into the COVID-19 pandemic, Gov. Pritzker has failed to control the virus and continues to rule unilaterally, punishing small businesses, families, and schools with lockdowns based on non-transparent, arbitrary measurements.

Now, the LaSalle Veterans Home is paying the price for Pritzker’s lack of leadership on taking care of our most vulnerable who are most at risk from dying of the virus. So far, 31 veterans at the home have tragically died after contracting the virus.

Gov. Pritzker has failed to keep his own house in order but is punishing small businesses who have been working tirelessly to remain open, keep their staff employed, and safely serve their beloved customers.

Gov. Pritzker has developed a pattern of blaming everyone for his own failures. Whether it’s the spread of COVID-19, the financial disaster Illinois is in, or even the failure of his Tax Hike Amendment that he contributed $56 million to, he claims it is not his fault.

But, what happens on his watch is his responsibility. Without accountability and transparency in state government, we will always have problems. Gov. Pritzker, Mike Madigan, and the Springfield political ruling class are an ongoing reminder of that.

Mike Madigan must go. But that is the beginning of the house cleaning that is needed in state government, not the end.