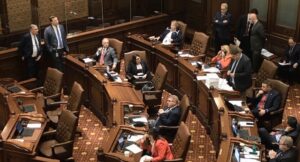 Growing up, my mom used to tell me, nothing good happens after midnight, the same goes for the General Assembly. In this case, when they’re in session, nothing good happens after 10PM. While you were going to sleep last night contemplating your work day or putting the finishing touches on your kid’s Halloween costume, the General Assembly again stuck their nose between you and your family’s health decisions.

They weren’t working all summer to curb the second-highest property taxes in the nation or ensure communities are safe as Chicago tops over 700 homicides this year, or demanding more accountability for corrupt elected officials to finally start restoring trust in government. Instead, they prioritized their own political agenda of putting government mandates ahead of your conscience and putting pro-abortion activists between you and your daughters.

At the direction of Gov. Pritzker, the General Assembly kept their streak of overreach and ignored the real problems Illinois and families are facing.

Unfortunately this quest for more government overreach isn’t at all surprising. We’ve seen it from other gubernatorial candidates like Terry McAuliffe in Virginia, who Pritzker just endorsed, who said in a debate that: “I don’t think parents should be telling schools what they should teach.”

It’s statements and beliefs like this that are indicative of who politicians like Gov. Pritzker think should be in charge; the government, not parents or individuals.

And to tie it all together, they’re trying to pass the Congressional Maps they drew that the Gerrymandering Project from Princenton graded an ‘F.’ So not only are they laser focused on getting in between your conscience and your children, they also want to choose who you are able to vote for.

When Gov. Pritzker and the Democratic Majority so openly show you where they stand on the government’s role in your family’s life and their embrace of political gerrymandering, believe them.

But don’t believe them in November of 2022 when they claim they’re trying to clean up Springfield and are on the side of working families.