This post originally appeared in the Chicago Tribune on 7/12/16.

“We need to come together as a community to unify so we can have the important conversation required to begin the healing.” 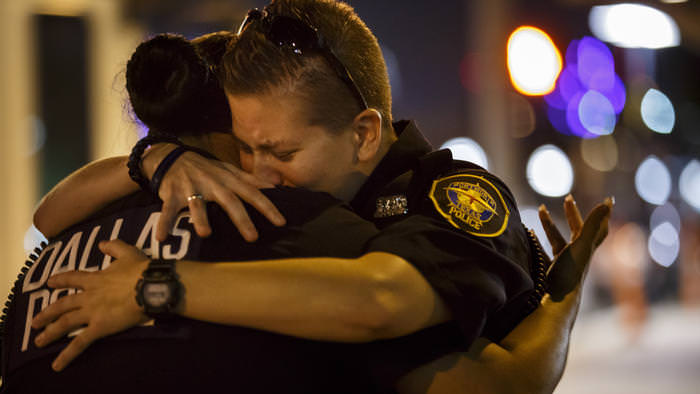 Is there anything more vapid than a politician’s patois in the aftermath of an act of evil?

Dallas, the public discourse is polluted by cable news anchorbots and their pabulum-puking pundits with banal obsessing about the acceptable parameters of the “important conversation” that never actually materializes.

Instead of dialogue, let me offer this monologue.

I am not a victim because I’m white and some lunatic in Dallas wanted to (and did) kill white people.

The Dallas murders are not a proxy for the state of race relations in America.

The Dallas murders do not represent an “epidemic” of hate, hate-crimes, or blacks targeting whites.

There is plenty of intellectual room between “cops can do no wrong” and “cops are all racists waging war against minorities” (please note, Lori Lightfoot, et al). The reasoned room in between is occupied by most of the Americans not on television, radio or Twitter.

Police officers should be held to a higher standard than civilians with respect to the use of force but not an unhuman one.  Police are tasked with de-escalating confrontations. But civilians can help. A little compliance goes a long way to ensure all parties leave a scene with both their bodies and rights intact.

The problem is not “extremism on all sides”. This is another phrase stripped of all meaning through repeated misuse. Timothy McVeigh was an anti-government agnostic. What “side” is that?

If we are ever to get to a conversation of any consequence, we must dispense with the left-right and black-white binaries and talk of those who use persuasion versus those who employ coercion regardless of the issue to be advanced or the grievance to be remedied.

This is not a failsafe. People get persuaded to do all kinds of terrible things.

Thus, we must also confront the matter of evil versus righteousness.

This is where we get beyond the instrumentalities of evil (e.g. fertilizer, rifle, handgun, poisoned Kool-Aid) and to the evil that lurks in the hearts of men and spreads to their gray matter. Addressing that which rots our core and subverts our decency is actually where the healing can begin.

The “important conversation” then isn’t one of disconnected means and ends but rather of moral clarity about how one legitimately connects means to ends in a civil society.

President Obama said after Dallas, “America is not as divided as some have suggested.”

Despite his best efforts from the Beer Summit forward and for largely different reasons than he suggests (we are not united around your gun control proposals, Mr. President), he is correct. We are not.

And we will not be so long as we ignore the professional agitators and the demagogues who decry incendiary rhetoric by using it.

And we will not be so long as we reject identity politics.

And we will not be so long as we dismiss guilt by association gambits.

And we will not be so long as we refuse the privation of reason that is required to foment racial discord.

And we will not be so long as we remember how we productively interact with persons who possess different characteristics than us all day every day.

If we can navigate all of these obstacles and those who erect them, perhaps we can finally have that important conversation.