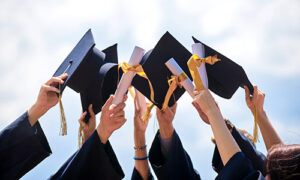 Not only will this loan forgiveness fall on the backs of working families already dealing with the highest inflation rates in 40 years, but it does nothing to hold the college-industrial complex accountable.

In Illinois, college tuition has doubled in the last decade. The University of Illinois boasts the second-highest tuition costs in the Big Ten and the country’s fifth most expensive in-state tuition.

A college degree was intended to be a gateway to opportunity. Today, young adults are so in debt that they can’t afford to get married or put off buying a home. Worse, their tuition and fees are no longer focused on supporting instruction in the classroom but are funding administrators’ million-dollar pensions.

Legislators should be looking for ways to reduce the cost of attending college in the first place so students can get a good education and start to build their own life. The state provides $2.2 billion ( and another $2.1 billion in pension payments by 2023) to support universities.

Families should demand accountability and reforms that improve the educational system while cutting costs. That means reforming the procurement policies, rightsizing pensions, and providing universities with flexibility for hiring and staffing decisions instead of tying their hands with mandates.

Higher education, similar to the K-12 system, is set up for adults and not for students who are repeatedly told they need a college education to make a good living and then find themselves with thousands of dollars in debt and few good job prospects.

State schools like Purdue University have managed to freeze tuition for their in-state students, while Illinoisans continue to see theirs skyrocket with little to show for it.

Illinois’ best and brightest are forced to travel to other states for college and many never return. They seek additional job opportunities in those states and the students won’t return to Illinois to begin their careers and start a family.

So the next time you hear a politician suggest canceling student debt or praising Biden’s action, demand they hold universities accountable NOW before the tuition crisis digs current and future students deeper and deeper into debt.