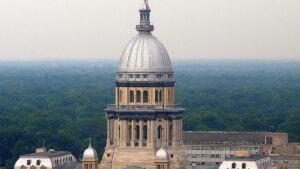 It’s obvious that Illinois is increasingly an outlier in protecting the corrupt process of giving the power to draw maps to partisan politicians. Since 2000, 22 of the 28 states that had a similar process created some sort of alternative independent commission to redraw the maps.

Both red and blue states have made changes to create a more free and fair map-making process that ultimately benefits the voters and not the politicians in power.

Gov. Pritzker continues to support this corrupt practice even though he promised voters while running for governor that he supported Independent Maps. He made the calculated decision to protect his political allies rather than risk giving voters the chance to choose their elected leaders.

Without competitive legislative races, voters aren’t given a proper chance to hold their representatives accountable.

The People’s Independent Maps Act spearheaded by Sen. Dan McConchie and other GOP Leaders would create an Independent Commission and restore power in elections back to voters. It’s currently going nowhere in the legislative process. Just last year, a bipartisan group of legislators were in support of identical legislation. Now when it’s time to be courageous and follow through with their campaign promises, they falter.

To prevent future partisan maps, Illinois must establish an independent commission to redraw congressional and legislative districts and take power out of the hands of politicians.

Here’s what you can do:

The future of elections in the next ten years depends on it!