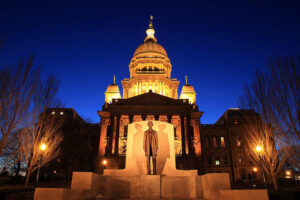 An editorial in the News-Gazette highlighted the “many serious political and policy problems” facing Illinois but failed to acknowledge that it is voters’ lack of power over their state government that allows these problems to fester.

In order for families to thrive and prosper in Illinois, they need a government that is responsive to their needs. Today that isn’t the case. The rules are rigged to shield those in power from political pressure, ensconcing them in office and allowing them to serve the politically connected rather than the people.

To start to change this power dynamic, we are pushing to give voters the right to recall their elected officials.

Their legislation is neither costly nor divisive. It ensures recall elections occur at the next regularly scheduled statewide election, meaning additional costs would be minimal. Additionally, their legislation purposefully leaves in place the regular line of succession and creates a high 60% threshold of votes required to remove an elected official from office, which prevents it from being used by an upset minority.

Rather than aiming at angry voters, it provides thoughtful voters with an emergency tool to deliberately use in extraordinary circumstances. It also encourages voters to engage with their government year-round, not just on the first Tuesday after the first Monday of November, by giving them a real tool of accountability.

One example is State Sen. Tom Cullerton, who was indicted in August 2019. A recall provision would have given voters the option to recall Sen. Cullerton in 2020. Instead, he will sit in office for over three years without answering to voters in his capacity as their elected official. His presence in the General Assembly has real costs. He’s voted on countless bills. He has voted for tax hikes and state budgets.

If voters make a mistake on Election Day, or new information comes to light, how long should they be punished for that mistake? Shouldn’t they have the power to fire their elected officials, not just hire them?

If voters are given that power, elected officials will take notice. In this way, the power to recall can act as a preventative measure. The threat of a recall forces government officials to be more responsive to the concerns of their constituents.

Take the City of Chicago where 616 people have been murdered so far this year. If Chicago’s leadership saw the threat of a recall gaining steam, would they act with greater urgency to keep families safe? We think so.

During the 2-year-long budget impasse, would then-governor Rauner and former-speaker Madigan have acted differently if voters had the threat of recall? We think so.

Although we are sympathetic to concerns about elected officials serving a prescribed term length, those concerns should be balanced by concern for the families promised an honest and responsive government.

A view that prioritizes the integrity of elected officials’ terms is necessarily cavalier about families’ needs. Families face the crushing burden of taxes every year, children get one chance at their education, and insider deals punish business competitors in the moment. Four years is an awfully long time to tell those hurt by a corrupt or failing government to wait.

Giving voters the power to recall elected officials won’t solve all of Illinois’ problems. There is no silver bullet. But, for decades, those in power have been promising reform, with little to show.

Springfield politicians won’t even allow a hearing on Sen. Barickman and Rep Batinick’s Constitutional Amendments or on two others aimed at empowering voters.

Some Illinoisans may be content waiting for our elected officials to police themselves. Democrats have controlled the Illinois House for 25 years, but maybe next year, we’ll see an end to the culture of corruption. Gov. Pritzker spent his first three years breaking the campaign promises he made to push reforms, but maybe another term is all he needs to end the chronic corruption.

Alternatively, maybe the embattled families of Illinois will agree that patience isn’t always a virtue. That by any common-sense standard, politicians have failed to curtail corruption. That we need to create external pressure and accountability on Springfield so we can rebuild trust in government.

Instead of relying on the entrenched political class to reform themselves, this advisory question brings the discussion of corruption and tools of accountability straight to the people. It forces candidates up and down the ballot to acknowledge Springfield’s culture of corruption and support this solution or offer their own.

Illinois is ranked nearly last in every quality of life category compared to the rest of the nation. Families pay one of the highest tax burdens yet are burdened with the worst pension crisis and the second most corrupt government in the country. Families are fleeing Illinois to states where the government serves their interests instead of the political insiders.

Is giving voters a tool to hold their elected officials accountable really such a bad thing?