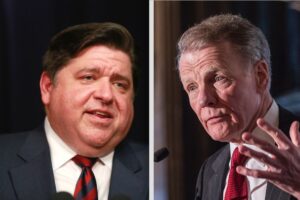 The Illinois Opportunity Project is optimistic for the State’s future following the long-awaited indictment of House Speaker Mike Madigan.

Mike Madigan is one of the most high-profile indictments in the Illinois Democratic Party. But he is not alone. There is Chicago Aldermen Ed Burke and Patrick Daley Thompson, State Rep. Luis Arroyo, State Sen. Terry Link, and others.

Yesterday’s indictment is a good step towards creating a government that is responsible and accountable to the people. But there is still more accountability to go. There is Tom Cullerton, who just pleaded guilty while serving as State Senator, and countless other members of the General Assembly who turned their heads, voted Madigan as Speaker, and gleefully accepted his campaign cash.

The people of Illinois have already rejected Mike Madigan’s culture of corruption. They rejected his and Gov. Pritzker’s Tax Hike Amendment, his Supreme Court Justice, and four of his hand-picked incumbents in the statehouse in the last election. Illinois voters saw through his corruption and lies and demonstrated they were ready for change. This reckoning of accountability will continue to bubble up.

As elected officials desperately work to distance themselves from the longtime leader of their party, it is worth remembering what they did when they thought no one was looking.

Legislators unanimously voted for Madigan for Speaker for years. They took millions of dollars from him. They allowed him and his staff to run their races. They rallied behind him in the face of a ‘me-too’ scandal that engulfed his inner circle.

They have a lot of questions to answer:

Chief among them was Governor Pritzker.

Barely four years ago, Gov. Pritzker funneled over $7 million to Speaker Madigan. Madigan’s spokesperson said, “(Madigan and Pritzker) spent a lot of time planning campaign strategy and planning campaign operations.” So how did their partnership work? When, if ever, did they discontinue it?

Mere months ago, the Better Government Association showed that Governor Pritzker’s office coordinated millions of dollars of spending requests for Speaker Madigan and moved his projects to the front of the line. Why did Pritzker offer this exclusive access and help to Speaker Madigan?

Should the people of Illinois be grateful for having Mike Madigan as Speaker of the House, as Pritzker urged previously? When did he change his mind?

Did Pritzker know about Madigan’s corrupt practices? Did he care? For years, Pritzker refused to call for Madigan’s resignation even as the evidence against him mounted.

Pritzker’s about-face on Madigan is jarring. And telling. He preaches ethics but practices political self-interest.

“Instead of exclamations of, “I told you so,” it’s finally time to get to work to reverse Illinois’ trajectory and make the State a place that families and small businesses migrate to instead of flee from.

That means Madigan’s indictment must be the start of the house cleaning necessary, not the end.