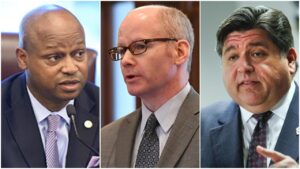 As in years past, the General Assembly went late into the night on Memorial Day and into Tuesday morning to pass a budget for the State. Speaker Welch and Senate President Harmon have supermajority control and had months to hammer out the details on important issues such as the budget, ethics reform, and an energy bill that was never even able to be filed. Yet, they still couldn’t get done on time.

Was it intentional to release these major bills at the last moment without time for public comment or scrutiny? Or was it their own incompetence that they couldn’t produce the necessary legislation in time working in the middle of the night? Which one was it?

Regardless, both are indicative of the current culture of governance in Springfield and its partisan-driven, failed leadership.

One of the most notable pieces of news from the weekend was the absence of Gov. Pritzker. For all his tough talk on corruption, “fiscal discipline,” and non-partisan maps, he was nowhere to be found.

The “ethics reforms” that were passed were completely watered down, missing key components such as allowing a 6 month revolving door from legislator to lobbyist and leaving the Legislative Inspector General with little power to investigate corruption. Ironically, these reforms were being debated the same week that Mike Madigan’s former Chief of Staff was indicted. And Democratic legislators still refused to take a hard stance.

The budget spends $42 billion with help from the federal government and provides no property tax relief, hikes $665 million taxes on businesses and acts as a bandaid on the state’s exploding pension debt. This is what Gov. Pritzker considers “fiscal discipline.”

Remember when Gov. Pritzker threatened an income tax hike and “painful cuts” if you didn’t vote for his Tax Hike Amendment? Turns out he lied about that too.

In reality, this latest 102nd session was another Pritzker failure. It’ll be his third unbalanced budget in a row. There was little done to curb corruption and hold politicians accountable. And he failed to lead on Independent Maps and will break his promise to veto a partisan map that was drawn behind closed doors.

Despite Gov. Pritzker’s control of the executive branch and the Democrat-controlled legislature, he and his cohorts are never responsible for the state’s failures. He’ll take the victory lap on the budget even though we all know it doesn’t do anything to change the trajectory of the state.

Join our movement to change the state below: