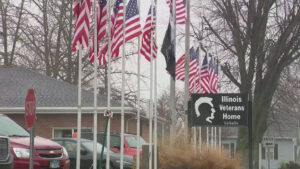 36 veterans tragically died from a COVID-19 outbreak at the LaSalle Veterans’ Home. Even more tragic, these deaths could’ve been avoided according to an investigative report from the Illinois Department of Human Services Inspector General.

The mismanagement and failure at the LaSalle Veterans’ Home is an inexcusable failure. While running against Gov. Bruce Rauner, Pritzker slammed the former governor for the legionnaires’ outbreak at the Quincy Veterans Home.

“We need to stand up for those who defend our nation and the way to do that is to make sure that they’re safe and especially when they’re under the care of the governor and the government of the state of Illinois. That didn’t happen under Rauner…he failed to protect them.”

Gov. Pritzker failed these 36 veterans and their families. By his own standard, Pritzker failed them. As a result 36 people are dead. Their families deserve accountability. We all deserve to know it won’t happen again. That means a resignation from Pritzker’s appointee, disgraced former Veteran Affairs Director, Linda Chapa LaVia, is barely a start.

Gov. Pritzker’s hypocrisy is indefensible. It shows a politician more concerned with managing his image than managing the state. But accountability does not stop with Gov. Pritzker.

The General Assembly is an independently elected body that should act as a check and with oversight over State Government. Instead, legislators who previously held state government accountable, have gone silent. For example, State Rep Katie Stuart has yet to comment on the scathing report, but was quick to call the Rauner Administration’s handling of the Quincy deaths, “shameful.”

State Rep. Mike Halpin who serves as Vice-Chairman of the Veterans’ Affairs Committee has also not found the time to comment on the report or demand accountability from the Pritzker administration.

Sen. Rachelle Crowe who serves on the Senate Committee of Veterans Affairs has also yet to issue a statement or demand more answers or repercussions for those at fault.

Sen. Tom Cullerton who serves as the Chairmans of the Veteran Affairs committees and was indicted last year for embezzlement was one of the leading voices urging the Attorney General back in 2018 to investigate potential criminal charges against the Rauner Administration for their handling of the Quincy case.

Now, when 36 veterans are dead under Pritzker’s watch, he has a much more subdued tone with the current administration. He said, “I spoke with the Governor this morning plus IDVA Director Prince late last night and was assured their teams would be helpful and responsive during these hearings.”

Politics shouldn’t get in the way of holding people accountable. Both sides should come together to push for further understanding of who knew what and when did they know. It’s the least that can be done for the families and the losses they suffered. It’s the first step towards ensuring these tragedies aren’t repeated.