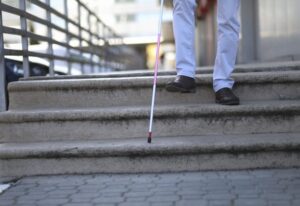 He calls the budget passed last month a “significant turning point for our state.” Says the ethics reform legislation will stop corruption in Illinois in ways that we have never before. And he thanked the Illinois State Police Director for working with advocates and lawmakers on gun safety efforts.

Speaker Welch echoed the same sentiments. Praising Pritzker’s signing of the new maps claiming it was a “win” for the people of Illinois. He even exclaimed how proud he was of Leader Elizabeth Hernandez for her work on the maps. Welch also held a press conference with his fellow House Democrat colleagues “celebrating” all their accomplishments this year.

Pritzker and Welch may be celebrating, but unfortunately, a lot of Illinoisans aren’t.

Gladys and Michael Thomas aren’t part of the celebrations. Gladys’ son Michael’s day program at the Chicago Lighthouse for blind adults was cut due to lack of state support.

There wasn’t room in the $42.3 billion budget for them.

In Chicago, families are mourning, not celebrating. The Chicago Sun-Times reported that fifty-two children under 15 have been shot and 10 killed so far this year. Children are living in fear, and politicians in Springfield are making communities less safe. Gov. Pritzker signed a “police reform bill” that he says “Expands Safety, Fairness and Justice.”

Here are some other folks who are not partaking in the celebrations:

Who will be left celebrating in Illinois if things don’t change?

Gov. Pritzker and Speaker Welch may be having fun putting on a show for the media, but you know the truth.

Educate your neighbors, tell one friend that Pritzker’s vision of Illinois protects the elite at the expense of the average citizen. That’s how change happens. And in 2022, you may be the one who is celebrating.