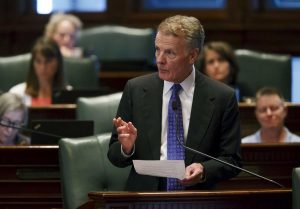 Just the name Michael Madigan brings out the idea of being a hypocrite.

I’m not just talking about Madigan’s feeble effort last week to transfer Illinois’ ethics problems to Donald Trump and Roger Stone. Something the House Speaker did just one day before the explosive court papers that had Public Official A planted front and center in a decade old pay-for-play scheme with ComEd that forced the utility to agree to a record $200 million fine. I’m thinking more about the people who’ve had their chances to stand up – even now – and have said nothing.

It’s not like this was the first chance to speak up and speak out against Madigan. I mean did we forget the report that Pritzker hired 35 job seekers off a Madigan clout list? That news came out just a month ago!

Too soon? Alright, then we could dive into the sexual harassment scandal that plagued the Madigan office during the #MeToo movement. Did anyone cringe? Yes. Were women hurt? Absolutely.  Did any female lawmaker give Madigan campaign money back? Karina Villa sure didn’t. The former West Chicago school board member turned freshman lawmaker could have used the moment for a “teachable moment.” Instead, she, like others, carried on with $1.4 million in Madigan cash to start a 2020 State Senate campaign.

Still not convinced there were chances? How about in 2013 when Metra CEO Alex Clifford had his contract bought out for $871,000 setting off a chain of events that led to the discovery of 800 index cards of clout, and Madigan’s request for a raise for a former campaign worker at a time when Metra had a pay freeze in place. (You know who else requested a raise for someone at that time? Rep. Luis Arroyo and here’s what happened to him.)

Where was the inspector general during this? Oh yeah, the House and Senate didn’t have one for a while because, well…guess who would have to be the one to call that for a vote?

With all that said, it’s obvious that corruption has cost Illinois a chance for ethics reform and for outlets to fix the pension system. This is the reason residents of the Land of Lincoln are facing the financial mountain before them. It’s not the tax system.

Call for Madigan’s resignation. Go ahead! Some Democrats did. But we both know what will happen. He will stay put as the longest-ruling state house speaker in American history. By doing so, Madigan is forcing you to choose in November: Do I give him more power to raise taxes even higher or not?

The answer is easy. Don’t be a hypocrite.

Take action. Mike Madigan cannot be trusted with more of your hard-earned money.