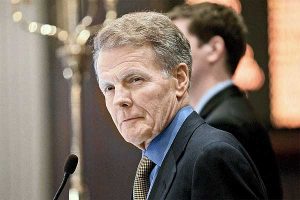 Michael Madigan continues to withstand the test of time and scandal. As the Illinois Democratic Party shifts farther to the left, the southwest side Representative remains King. He remains in charge of four different political campaign war chests, as head of the State’s Democratic Party, and as Speaker of the House. Because in charge, is where rank and file Democrat legislators want him.

Despite being named by federal investigators in an alleged bribery scheme, despite over 300 women signing a letter alleging the rampant culture of harassment and toxicity in the statehouse, and despite his failed policies that have resulted in the second-highest property taxes in the nation and a credit rating barely above junk, he still gets the support of his colleagues, Gov. Pritzker, and organized labor.

Just this past weekend, Madigan received a quarter of a million dollars in campaign donations. The numbers will continue to climb as we get closer to November.

His power and influence sprawl all over the state. Madigan has already invested close to $80,000 in support of Rep. Monica Bristow in the Metro East who is up against conservative reformer, Amy Elik. In 2018, Madigan poured in $1.3 million to elect Bristow and keep this seat in his control.

He’s given $71,000 to State Rep. Nathan Reitz who was appointed to replace Rep. Jerry Costello after Costello vowed to vote against Madigan and Pritzker’s graduated income tax hike. Conservative reformer, David Friess from Red Bud, is fighting to finally get this seat out of Madigan’s control.

Madigan’s stranglehold over the suburbs has also increased over the years. Madigan tried to oust, tax fighter, Rep. Tom Morrison from Palatine. Madigan funneled in close to $1.5 million in 2018 to support candidate Maggie Trevor. Morrison is one of the last suburban Cook County Republicans in the statehouse. Madigan continues to set his sights on this seat and there will be another close fight in the 54th District this year.

In Lake County, Madigan spent big money in 2018 supporting Reps. Mary Edly-Allen (Libertyville) and Joyce Mason (Gurnee). These two races combined saw $1.6 million from the Speaker. Reps. Edly-Allen and Mason both refuse to mention Madigan by name and have yet to call for his resignation. Conservative reformers Chris Bos and Dan Yost are fighting to restore power to families in their districts and have vowed not to support Madigan as Speaker.

Madigan’s influence spreads farther than the southwest side of Chicago and affects all Illinois families. As he continues to enjoy the support from his Democratic House colleagues all over the state and from Gov. Pritzker, nothing changes.

The one thing you can keep from Madigan’s control is the power to open the constitution and have free reign to raise your taxes. The graduated income tax initiative on the ballot gives voters power over their pocketbooks. This unique opportunity gives power to taxpayers who have felt powerless under Madigan for decades.

For now, Madigan isn’t going anywhere. But you have the power to limit his influence.