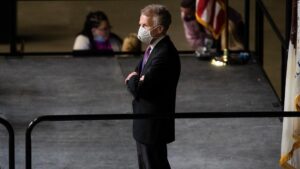 Speaker Madigan, the longest serving Speaker in American history is done. But, Democrats won’t be able to wipe out his decades long legacy of high taxes, pay to play politics, and financial destruction of Illinois.

What else will they be unable to undo?

Cycle after cycle, House Democrats reaped the benefits of Mike Madigan’s political power and trove of campaign dollars. Exchanging campaign contributions for loyalty, favorable remaps, or even jobs for their friends and family turned out to be enough for the Speaker to hold power for four decades with the overwhelming support from his caucus.

Public sector unions, other various special interest groups, General Assembly members, and both former Governors and Gov. J.B. Pritzker knew where the power began and ended in Illinois. Former Gov. Bruce Rauner even infamously stated, “I am not in charge. I’m trying to get to be in charge,” during a press conference before the Primary election.

Speaker Madigan withstood scandal after scandal including the massive #MeToo movement from a few years ago that laid a lot of blame on the Speaker for the culture of toxicity and harassment that permeated the statehouse. His Chief of Staff was removed for allegations of sexual harassment as well as one of his top political operatives. Did Democrats take a principled stand? House Democrats elected him Speaker.

His closest confidant, Mike McClain, who has since been indicted for his alleged involvement in the ComEd scandal, was revealed in an email exchange asking for leniency for a state worker in a disciplinary case arguing the man “has kept his mouth shut on Jones’ ghost workers, the rape in Champaign and other items.”

What also cannot go understated are the damaging policies implemented by the Democrat Majority through Speaker Madigan that have hurt families and small businesses.

Illinois sits in the bottom half of states in private sector job growth and ranks in the bottom half for both small business friendly policies and taxes. Families also pay the second highest property taxes in the nation which contribute to the 9th highest tax burden in the country.

And as Illinois inches closer to junk status, the population declined for the seventh year in a row in 2020.

So as House Democrats pat themselves on the back for finally making the political expedient decision to replace their powerful Speaker and leader of their party, think of the policy decisions they went along with that have put Illinois’ families and businesses in this financial predicament.

As the General Assembly kicks off session there will be new names, but with the same culture of corruption and abuse and a policy agenda aimed at enriching the powerful. The housecleaning that is needed begins at the top with Madigan, it doesn’t end there.

That is where you come in. Change won’t come from Springfield, we must force reform. We must hold the new leadership’s feet to the fire on lower taxes, Fair Maps, pension reform, real ethics reforms, and plans to safely reopen businesses that have been held hostage by Pritzker’s arbitrary COVID-19 restrictions.

Some may say Madigan has irreparably harmed the state, but grassroots activism and leadership from individuals like you will begin to undo his damaging legacy. Stand with us and continue to improve our state.