Rahm Emanuel has portrayed himself as Chicago’s “reform mayor.” As a candidate in 2011, he promised to “turn the page and bring in a new era of transparency, accountability and an end to business as usual in city government.”

So how does his record stack up to his rhetoric?

Today, the “Reform Mayor” unveiled his 2016 city budget, ostensibly paid for by the largest collection of tax and fee hikes in Chicago’s history. Emanuel is pitching the idea that over $500 million in new property taxes and several other tax and fee hikes are necessary to secure Chicago’s financial future. The tax hikes are intended to generate the funds necessary to shore up police and fire pensions and school construction. Emanuel’s plan also imposes a garbage-collection fee on property owners that will generate $100 million more. The $500 million property tax increase will cost the owner of a home valued at $250,000 about $500 more each year. The garbage fee will be an additional monthly assessment of $11 to $12 per household.

The mayor’s 2016 budget will also include:

The worst part of all of this is that, as monumental as Emanuel’s proposed tax and fee increase is, it won’t solve Chicago’s fiscal problems, mainly because the Chicago Public School’s $9.5 billion pension crisis remains unaddressed in the Mayor’s proposal. The short term increase in revenue will only temporarily fill gaps in city budgets and further delay the necessity to implement structural reforms that could improve the city’s fiscal outlook in the long-term. 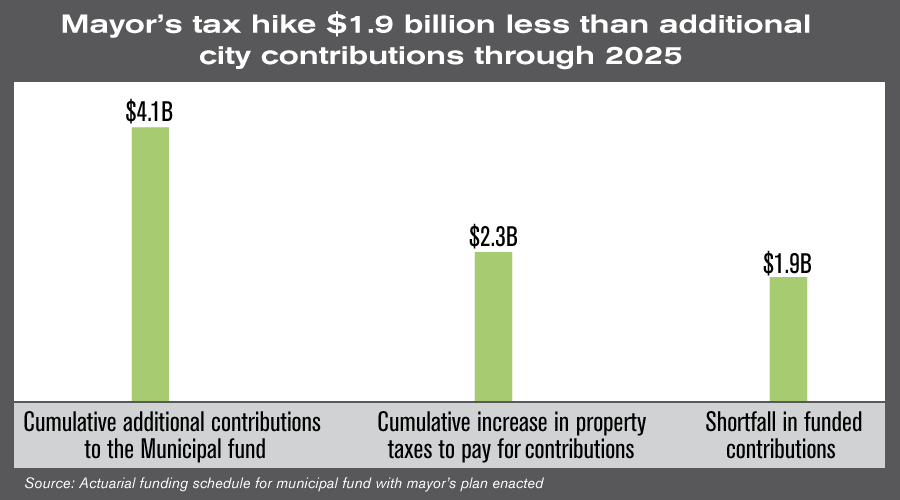 Moreover, without real pension and spending reforms, more property tax hikes will be forthcoming. More residents will flee the city, as a result. The city’s economic crisis will be accelerated. And one of the world’s great cities will continue to wither under Emanuel’s “leadership”.

As it happens, Mayor Emanuel has famously offered advice on how to act in a crisis. His words of wisdom? “Never let a crisis go to waste. What I mean by that is it’s an opportunity to do things you didn’t think you could do before.” Chicago is indeed in crisis. And Chicagoans now have a real opportunity to challenge the political status quo and demand the reforms they were promised – at school board meetings, at city council meetings and at the ballot box. Let’s not allow this opportunity to go to waste.