These are hard times for Chicago Mayor Rahm Emanuel.  The mayor, whose policies and personality have precipitated his declining popularity, now faces a runoff against a lesser known, underfunded, far left challenger, Jesus “Chuy” Garcia. And, Garcia appears to be growing more viable by the minute.

Though it’s too early to predict how this will end, one thing is certain – Chicagoans have been given a great opportunity to demand that Emanuel either provide realistic and compelling solutions to the city’s greatest problems or lose his job.

Chief among those problems, and one that Emanuel has largely ignored, is the 2016 pension payment looming over the city.  Nothing else can be adequately addressed – not the education crisis, not the rampant violence – without first dealing with the pension payment.

In 2016, Chicago is required by state law to make a $557 million contribution to stabilize police and fire pension funds that have assets to cover just a small fraction of their respective liabilities.  Funding this payment will impact nearly every aspect of the city’s budget. 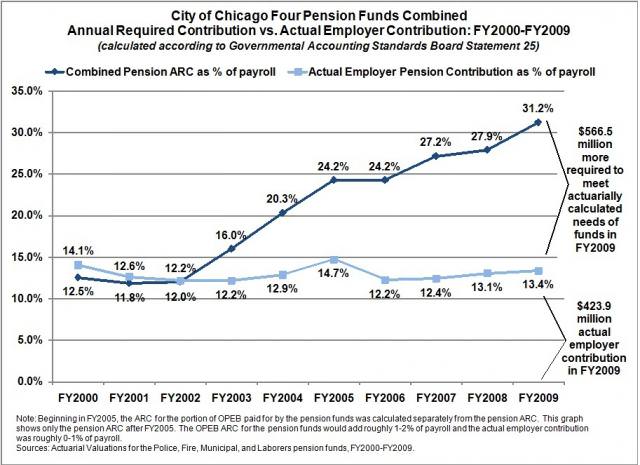 To voters primarily concerned with school closings or the performance of Chicago Public Schools, the 2016 pension payment will be a significant factor in determining how, and at what level, schools will be funded.

To voters primarily concerned with the escalating violence in Chicago’s neighborhoods, the 2016 pension payment will dramatically impact the way the city staffs its police and fire departments.

Chicago is in a pressure cooker. The rest of the state should take note.  Funding the 2016 pension payment will be painful.

The only silver lining is that the next mayor – whether it is Garcia starting fresh or Emanuel making amends – will have an opportunity to set a new course for the city.  And Chicagoans have the opportunity to determine which man is more likely to face the pension problem head on and usher in a large-scale urban reformation.

So who should the voters choose?  At the Illinois Opportunity Project, we believe that solving a problem of this magnitude requires sound fiscal judgment, political courage and moral clarity. We believe that leadership is found in the willingness to face painful truths about the actual cost of our actions and omissions. We believe that the best leaders do not ask first about party, special interests or electoral prospects, they ask first about the best course toward real and sustainable improvement.  And, especially in the race for Chicago’s next mayor, we believe leadership requires those seeking power to be more than they have been before.

Over the next several weeks, Chicagoans must assess which candidate is more likely to display these necessary characteristics.  They can best do so by forcing the candidates to substantively answer one pivotal question: What is your plan to solve the city’s looming pension crisis?