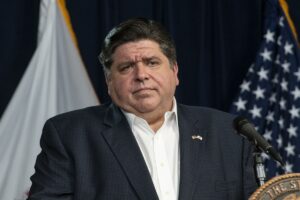 Local families are suffering while Gov. Pritzker is flailing and losing support on all fronts.

We have been documenting Gov. Pritzker’s failures since May of 2020 including his mishandling of the COVID response, push for ever-higher taxes, and his complicity in the state’s corruption. It’s now clear that average families in Illinois are catching on.

Gov. Pritzker’s approval ratings were 63% in April 2020 and have been declining ever since. Today, he stands about even with 40.6% favorables and 41% unfavorables in the latest polls with 18% having no opinion. A significant drop as voters review his record.

His unfavorable ratings shouldn’t come as a surprise after his Tax Hike Amendment, which he spent his entire campaign advocating for and then spent $58 million promoting, failed. Voters made their voices loud and clear: No more taxes.

We have seen Republicans in the House and Senate offer a commonsense critique of the Governor for ruling unilaterally and not addressing the unique concerns and circumstances from communities all over the state in regard to COVID restrictions. Senator Minority Leader Dan McConchie has filed legislation that would require the General Assembly to approve any subsequent renewal of emergency powers after the initial 30-day state of emergency declaration.

But even his fellow Democratic colleagues are growing weary of his leadership. After Pritzker failed to call on Mike Madigan to resign as Speaker of the House and as Chairman of the State Democratic Party, the Democratic committeemen decided to vote Congresswoman Robin Kelly as the next party Chair instead of his and Madigan’s preferred candidate, Michelle Harris.

In addition to the political front, Democrats are growing more and more agitated with the Pritzker Administration’s failure to improve the Department of Employment Services, the failure to protect our nation’s heroes at the LaSalle Veterans’ Home, and the confusing, inefficient roll-out of the COVID-19 vaccine.

Families across the state aren’t able to provide for their families because they can’t get through to IDES. After several hearings and complaints from the legislature, Democratic State Rep. Kathleen Willis voiced her concerns saying “it’s the same song and dance” in response to IDES’ excuses.

There is a bipartisan push for an investigation into the LaSalle Veterans’ Home COVID outbreak that killed 33 veterans. Lawmakers want an auditor general, separate from the Pritzker administration, to find out what really happened and who is at fault for this tragedy and poor management.

Democratic State Senator Julie Morrison voiced concerns from her constituents and held a committee hearing on the COVID-19 vaccine rollout which was reported to have left even more questions and a lack of transparency from Dr. Ezike and others in the State Health Department. Sen. Morrison says she plans to hold more hearings on the issue.

Gov. Pritzker has also alienated himself from the law enforcement community, parents who wish to have more choice over their children’s education, and the business community as he continues to tack on more tax hikes.

Is Gov. Pritzker destined to be a one-termer as suggested by the Chicago Sun-Times?