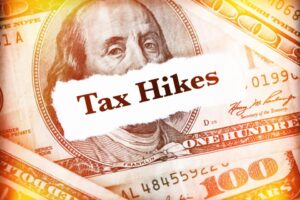 He told residents that he saved them money at the gas pump, grocery store, and that he was putting money back in their pockets.

In actuality, he was just delaying or suspending tax increases that are now in effect with the same bad economy. The inflation rate is still over 7%, grocery prices rose 12% according to the latest data, and Illinois gas prices continue to outpace the national average and currently sit at $3.45 per gallon compared to $2.90 in 2018 when Pritzker was first elected.

Officially, the gas tax increased over 3 cents on January 1, 2023 and the grocery tax will be reinstated on July 1, 2023. Does that sound like relief to you?

That’s why we propose the elimination of yearly gas tax increases and the total elimination of the grocery tax. Illinois residents have had no relief and are getting hit with more taxes this new year on top of already inflated goods and services.

Contact your State Representative and Senator demanding they end the yearly gas tax increases and eliminate the grocery tax so families can afford to stay in Illinois.