A few weeks ago, the nation watched the video of a police officer firing 16 shots at Laquan McDonald, a young black man, armed with only a small knife and walking away from police. Two of those shots were fired at McDonald while he was standing, with the remainder ripping through his body after he fell to the pavement.

None of the at least five other officers on the scene attempted medical assistance for the young man as he lay on the ground. Witnesses were “shooed away” from the scene, without their contact information even being taken. Numerous other police vehicles were on scene, but none of their dashboard video or audio has been released—and may have been destroyed. Even the security video from the local Burger King, which officers demanded password access to in the aftermath of the shooting, has a void in its footage during the critical time of the shooting.

Mayor Rahm Emanuel was in the midst of a tough re-election campaign in October 2014, desperately needing the support of the City Council’s Black Caucus to defeat his Latino challenger. As details slowly emerged from whistleblowers about the shooting, the City steadfastly refused to release the video. Once the Mayor—and those who supported him—were clear of the April 2015 election, the City Council agreed to pay the family of the young man $5 million, with the further caveat that the video not be released. But an independent reporter sued and, over a year after the shooting, finally forced the City to release the footage.

This video would’ve made national news, whenever it was released. But for the people of Chicago and of Illinois, it’s not merely the killing but the cover-up that has shaken us. This incident has laid bare how far our elected officials will go to protect the established political power structure in our state. 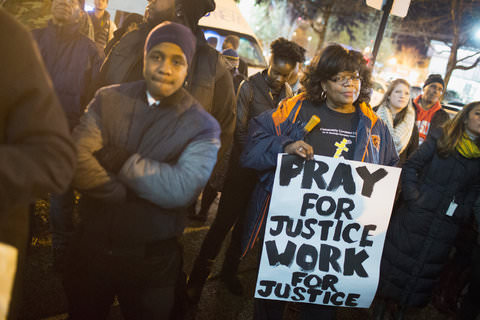 State’s Attorney Anita Alvarez was informed of the relevant facts and had the video much earlier, but decided to charge the officer involved 13 months later, only after she knew that the video would be released. Attorney General Lisa Madigan’s office dragged its feet on enforcing the Freedom of Information Act against the City of Chicago to release of the video, even allowing the City to violate Illinois law in thwarting the legal review process under the Act. And when Madigan’s office did finally issue a decision, it was issued as “non-binding,” which against the City of Chicago, meant the decision was not worth the paper it was printed on.

Mayor Emanuel has now fired the police superintendent and is trying to focus the attention on State’s Attorney Alvarez, who is up for re-election in March 2016. However, it’s reported that Speaker Mike Madigan will support Alvarez in the next election, so as to shore up his Latino and suburban Cook County vote.

In any other structure, whether public or private, you’d fire every single person involved and start over. But not in Illinois. At least not up to this point in Illinois.

Fortunately, the people are outraged. The press is on the attack. Some have urged “calm” in the wake of this video, but that’s not quite right. Peaceful, yes, but we should not be “calm.” Any person with a conscience and a sense of right and wrong should be furious about this entire situation: both the tragic unnecessary killing of a human being, and the deep corruption of a political system to the point that people will do anything to protect their power and elective offices.

Moreover, this outrage isn’t—and shouldn’t be—limited to folks in the City of Chicago. The same people who covered up the killing of Laquan McDonald hold vast influence over our entire state and its politics. The way forward from here will not be driven by calm, but by that special sort of righteous anger that drives positive change: the type of feeling and thought which throughout history has inspired political movements and revivals.

We have a long road ahead to turn Illinois around, but it starts with a people who are disgusted by the status quo and ready for a new way.

Peter Breen is a State Representative for Illinois’ 48th House District. He also serves as a public interest lawyer with the Thomas More Society, specializing in defense of free speech and religious liberty rights.