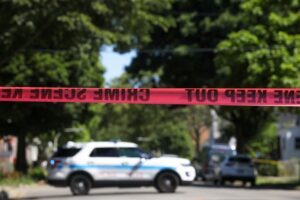 Supporters of the SAFE-T Act are being forced to defend their position on the Act, especially the impending elimination of cash bail on January 1, 2023. More and more residents are becoming weary of this disastrous legislation as fears of crime and public safety reach all-time highs.

There’s no amount of explaining or social media graphics they can do to talk their way out of this bad legislation. Gov. Pritzker and the legislators who passed this bill are asking Illinoisans to trust their expertise on public safety over the 100 out of 102 States Attorneys from both parties in Illinois who are strongly against this dangerous and costly legislation.

For those who are trying to understand and form their opinions on the 800 page bill that was voted on in the middle of the night, look no further than Cook County’s “reformed” bond hearings to see what’s coming for your community on January 1.

CWB Chicago started a running list of offenders accused of killing or shooting, or attempting to kill or shoot, someone in Chicago while awaiting trial for a felony. So far in 2022, there have been 37.

Since 2020, there have been 249 victims of these offenders. Tragically, 84 people lost their lives because politicians forced prosecutors to let them walk free.

Under the SAFE-T Act, people on electronic monitoring can move freely two days a week to run errands and complete tasks. The law also decriminalized any monitoring violations of less than 48 hours.

If the offender is already alleged to have committed a felony offense, why should we expect them to adhere to this ridiculous “48 hour rule” when they know there are no consequences? How can the victims of their crimes feel safe knowing the perpetrator is LEGALLY free to roam the streets?

This is one of the many backward elements of the SAFE-T Act that puts criminals before the victims. That’s why ZERO law enforcement agencies in the state supported this bill and why they sounded the alarms on its dangerous consequences from the moment it was passed.

If you’re concerned about your family’s safety, call Governor Pritzker’s office and demand he repeal this dangerous legislation before crime gets even worse in Illinois.