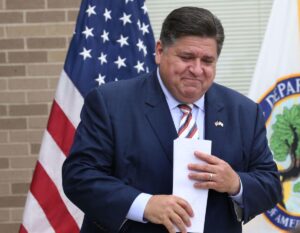 After yesterday’s breaking news that the U.S. Census Bureau undercounted Illinois’ population, politicians like Gov. Pritzker, Senate President Don Harmon, and House Speaker Chris Welch took to social media to congratulate themselves on what a wonderful job they’ve been doing in state government.

Their self-indulgent celebration couldn’t be further out of touch with the reality that ordinary families are experiencing. Just hours after their celebratory statements, there was yet another mass shooting in Chicago just a stone’s throw away from Water Tower Place. As it stands now, two are dead, and eight others were injured. This is on the heels of an already violent summer in the city.

As if families couldn’t be squeezed more, a new report that didn’t get as much fanfare shows  Illinois now has the HIGHEST property taxes in the nation, surpassing New Jersey.

This is in addition to the rise in energy prices and potential blackouts in Central and Southern Illinois this summer due to Pritzker’s latest energy bill, the increase in grocery prices, and the rise in other goods and services.

Not to mention the list of other concrete policies that force people to move out of our state. For example, Illinois notoriously ranks as one of the worst states in providing services for people with disabilities. These families cannot always wait out the seven years it takes to finally receive services for their loved ones.

Working-class families cannot afford to send their children to college in Illinois. That’s why almost half of graduating high school seniors who plan on attending college go out of state.

Criticizing policies and demonstrating their bad outcomes does not equal rooting for the demise of Illinois. In fact, it’s the opposite. Illinois has so many resources and untapped opportunities that can benefit everyone. But too often, the deck is stacked against ordinary people trying to get ahead and provide for their families.

On a positive note, that can change if policy changes. The future doesn’t lie in the hands of elected officials but in families and citizens who want to change the state, improve the quality of life, and increase opportunity in our state. That’s why we need you to champion good policies.