The Chicago Teachers Union (CTU) has voted to strike because their egregious contract demands were not met.

One of the main sticking points in the negotiation is that the union is refusing to increase the amount their members contribute to their own pensions. Teachers should be paying 9% of their salaries to fund their exorbitant retirement benefits. They currently only pay 2%. Taxpayers are stuck picking up the rest. Of course, the standard CTU demands persist as well. For example, the union still wants to make sure it has a say in who gets rehired and how teachers are evaluated, regardless of whether it’s in the best interests of the children in the system.

That’s because what’s best for children has never been the priority of CTU and its members, their empty rhetoric notwithstanding. In the last decade alone, over 200,000 people have left Chicago. Today, nearly 100 of its schools are half empty or have been closed altogether. Families have fled the city’s failing schools because the demands of CTU are not aligned with the needs of the children they serve.

A teachers strike is never about children. It is about the special interests of adults. In Chicago and elsewhere, the teachers unions are in the business of winning better salaries and benefits, protecting job security, pressuring for restrictive work rules and otherwise advancing the occupational interests of their members. The children are at best an afterthought, at worst cannon fodder, in political and contractual battles among those who divvy up power.

Because of the formal rules that unions fight for in labor contracts, district leaders can almost never get bad teachers out of the classroom. Nor can they allocate good teachers to the schools and classrooms where they can do the greatest good for kids. The teacher’s evaluation process is a full-blown charade, in which even the very worst teachers are regularly given satisfactory evaluations. Also, teachers are paid based on their seniority and formal credits, without any regard for whether their students are learning anything.

And so it goes.

CTU head Karen Lewis has complained that there are too many factors beyond the control of her members that impact their ability to teach “such as poverty, exposure to violence, homelessness, hunger and other social issues beyond our control.” Of course those challenges exist (mostly because of the bad public policy imposed by the elected Democrats CTU supports). Still, the University of Chicago is able to run four public charter schools serving 1,700 students exposed to those same challenges and have 100% of its 2012 class accepted to college.

It is increasingly apparent that the leaders of CTU and the politicians they fund are the biggest obstacle to educational reforms that would give millions of children a better education and a fighting chance at a better life.

CTU has long opposed expanding school choice, which would give low-income and minority students greater opportunity to leave failing schools and utilize other educational options like charter and private schools. School choice would add accountability and opportunity to the city’s education bureaucracy. But it would also slow down the gravy train.

Despite the ruling class’ best efforts, however, change is looming on the horizon. As a result of newer policies – like school choice – that have widespread appeal and popularity, public opinion of teachers unions is falling fast. Forty-three percent believe they have a negative effect on public schools, up from 31 percent in 2009, according to Politico. “People increasingly view teachers unions as a problem, or the problem,” according to David Menefee-Libey, a politics professor at Pomona College who studies education politics. 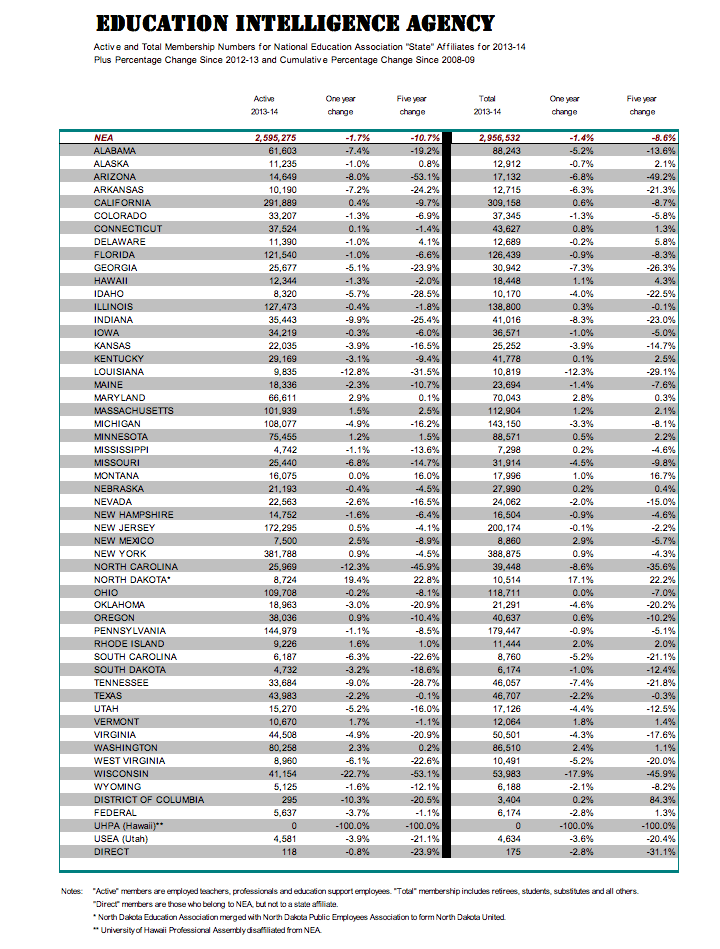 Even teachers are questioning their unions. According to Education Week, the National Education Association has lost 230,000 members (7 percent of its total) in recent years. Increasing numbers of educators are realizing they do not need to be represented by a body that hurts eager students and holds back great teachers while stuffing the pockets of union bosses and campaign coffers.

There are policy solutions on the table that will break up Chicago’s political power structure and ensure that the next generation of the city’s school children will have access to a quality education. The public is willing to listen. What we need now is courage from the parents and teachers who understand that special interests have empowered Machine Politics in Chicago at the expense of families and talented and dedicated educators. Instead of choosing the side of the union or the administration, they must stand up for families and demand reform to the city’s failed education system.

So, Chicago’s teachers voted to strike. That is today’s headline. Tomorrow’s headline can be different.