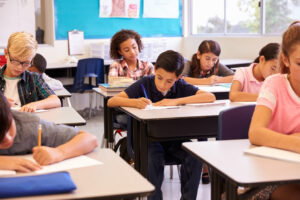 The school choice movement exploded during the COVID-19 pandemic when school closures that set back students academically and socially were dictated by politically motivated teachers unions rather than the input of parents. In states like Illinois, government officials failed to lead on the issue of reopening schools and left the decision to teachers unions who kept children in school districts like Chicago Public Schools out of the classroom for almost two years.

The National School Choice Awareness Foundation defines school choice as the process of allowing every family to choose the K-12 educational options that best fit their children.

The movement has long been championed by parents who want their children to have a shot at a better education and a better future.

But according to the Chicago Tribune, the school choice movement is simply a “movement supported by charter schools to offer more alternatives to public schools and has been criticized by teachers’ unions who say it will privatize education.”

Not only does this definition ignore the core constituency behind the movement, parents, but they also lazily copy teachers union’s talking points. The very organization that for too long has held low-income families hostage in failing public schools.

Despite criticisms from teachers unions and those who support the bureaucratic public education system, the movement to restore educational freedom to families continues to expand and gain support all across the country.

According to a poll from Real Clear Politics, 68% of Democrats, 82% of Republicans, and 67% of Independents support “giving parents the right to use the tax dollars designated for their child’s education to send their child to the public or private school which best serves their needs.”

Outlets like the Tribune define the movement the same way as their political opponents rather than give credit to the parents who are making waves and pursuing the best educational outcomes for their children.

Although Illinois has made significant strides in expanding educational choices for families, there’s much more to be done to ensure that each student has the best opportunity to succeed.