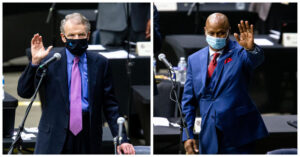 House Democrats and some members of the media are attempting to declare a “New Day” in Illinois state government. In reality, the selection of State Rep. Chris Welch (D-Hillside) to  replace Mike Madigan as Speaker of the House will result in very little systemic change.

When it became clear that Madigan would not get the votes, they turned to Welch.

Just two years ago, Welch nominated Mike Madigan as Speaker and was “proud” to do so. After Welch was voted Speaker, he praised Madigan, saying: “This state will never be able to adequately thank Speaker Madigan for the job he has done.

Huh? Does any of that sound like a ‘New Day?’

In addition to his complicity and support of Mike Madigan, Welch’s policy record is problematic for working-class families and small business owners.

In just the past three years, Welch supported the record-breaking 2017 income tax hike, voted to double the gas tax, and championed Gov. Pritzker’s Tax Hike Amendment, having proudly served as a Sponsor for the bill.

Welch was also one of the few lawmakers brazen enough to sue former Comptroller Leslie Munger for withholding legislative pay during the state budget impasse. State vendors and nonprofits weren’t receiving their payments, but Welch was more concerned with his own bottom line and enriching himself and his colleagues.

It’s not a “New Day.” In fact, it sounds exactly the opposite of what voters who are hungry for reform are looking for. Politicians like Governor Pritzker and Speaker Welch have agendas that run counter to what Illinois families and businesses are demanding.

Voters demanded reform, which means no more ‘good ole boys club’ in Springfield, no more pay to play politics and a functioning government that works for the people and not as a place for politicians to get rich.

Join us as we hold the General Assembly accountable for their failed promises of reform so we can proudly declare a “New Day” in Illinois.